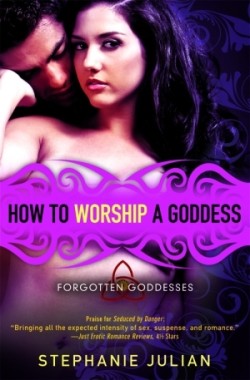 How to Worship a Goddess
by Stephanie Julian

Lucy, the Etruscan Goddess of the Moon and the goddess the Lucani worship. However, there are demons after her trying to steal her power to get their master out the Underworld, which makes is really bad timing when Brandon Stevenson, the ice hockey player she has been lusting sfter for two seasons steps into her bar looking for her.

I confess, I have been a bad bad girl! Normally I am really OCD about reading books in order, but I have been naughty as I haven’t read the first book yet: What a Goddess Wants, something I am going to have in immediately rectify as I really liked this book.

I liked the characters of Lucy and Brand in this book, I thought they made a sweet as well as flaming hot couple! The sex in this book was hot and frequent, Brand was a fricking love machine and had that dominant edge that gets me all hot and bothered, I would kinda hate Lucy if I didn’t like her so much! However, don’t be put off by my sex-being-frequent comment, as although it is, it doesn’t drown the book so you are reading 350 pages of being getting their end off. This book does have a story, one which continues from the previous book, and I will definitely be reading the next book in the series to see what will happen next.

Stephanie Julian has written a lot of books, all set in the same world, which is fantastic as I get the impression that some of the characters in this book were HEAs from her other series. But, this did make it a little confusing, I understood the world but I did get mixed up with what species was what. Not enough to ruin the book, but I think I definitely need to read some more of her other books till I get my head around it.

A great read, I enjoyed it and would recommend it to anyone wanting an erotica with a big heap of romance.

Suz, I’m so glad you enjoyed Brand and Lucy’s story. And I love the five toe curls!