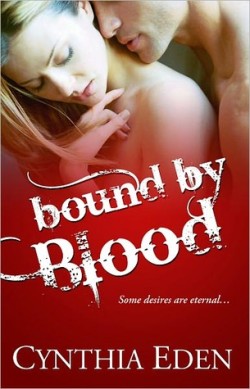 Bound by Blood
by Cynthia Eden

This was a pretty quick read and the story actually was pretty well developed for a short story. Basically there’s an open portal allowing demons to escape hell and they’re coming after vampires and shifters.Jace, leader of the shifter pack, has wanted and been in love with the vampire princess Morgan for a long time, and he sees this as the opportunity to finally have her. He offers the vampires an alliance against the demons if they give him Morgan. She is to become his blooded mate.

Of course things are not always as simple as they seem, the vampires think to use the shifter to close the portal.

There’s more betrayal ahead, quite a bit of hot sex, even though it seems Morgan’s connection to Jace was too instant for my taste. Lust at first sight?

But I did find this a bit boring. For a short story, it took me a long time to finish reading it because I always kept putting it down and reading something else.

Hmmm, I wonder if I would feel bored?