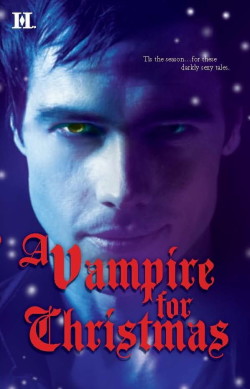 Charlotte is ditched by her best friend at a dance club and decides to head home when she realizes she is being followed by two strange men. Fear propels her forward to the safety of her car, but a man appears and does the ass-kicking for her. Since Charlotte has injured her hand during her scuffle to get to safety, this man offers to feed her and drive her home.

Trace is a guardian and a vampire. And although Charlotte has no recollection of this, the truth is, Trace and Charlotte had an affair before this. Swiped clean of their memory, Trace uses this one night to relive their happy moments together…in the comfort of her bed.

I liked Laurie London’s story. While Trace was a nice hero, I hoped for a little more with Charlotte. She wasn’t too memorable for me. I also thought that the beginning of the novella was stronger than the latter part, but that is not to say that the writing gets weaker as you read. Overall, I enjoyed this read.

Daniel’s got his hands full in a fight with two werewolves when a woman wrapped in winter gear breaks up the party. Sending the werewolves home, she invites the sexy vampire into her home for a quick kiss. Olivia’s got a dominant streak and isn’t going to back down when the guy she has her sights on is right there for her picking.

Out of all the stories in this anthology, I thought Hauf’s had the most memorable heroine. Olivia definitely had the best introduction and I found myself liking her spunk. However, after the strong beginning, I thought this story lost some of its appeal as it went on. Olivia may be alpha of the relationship, but I thought that Daniel was a really sweet vampire who had just the right sexiness to suit Olivia’s darkest desires. While I really enjoyed the banter between Daniel and Olivia, that was the only thing keeping me reading. And sometimes Olivia was a little too dominant for my tastes. Let the man seduce, woman!

Damien was one of the better heroes out of all the four stories. He was like a dark angel who I wanted to learn more about. Christmas Eve is a hard time for him since a year ago on this day, he lost Angelina, his love. When Perez Ramirez, the Captain of this immortal ship hands her to him, Daniel hopes that this Christmas will be better than the last.

There’s some resemblance to A Christmas Carol where Angelina takes Daniel back into the past. I’m not quite sure I liked this aspect of the story so much. In theory, it sounds like a lot of fun. But I much preferred the parts where they were just in the present.

Whereas in the other novellas, I liked the story better than the characters, in Where Herald Angels Sing, I liked the characters more than the story. What I did like about this story was Caridad’s writing style. I liked the overall tone she evoked and she describes things very eloquently. I hope to give this author another shot.

All I Want For Christmas –Alexis Morgan – 3.5 stars

Out of all the stories, I felt that Morgan’s story was the best. It had a steady beginning, capturing my attention with Eagan, the vampire who just hates holidays. I like him already! And Della, a sweet diner owner who I’d loved to be friends with. Paired together, I thought they complimented one another well. And the best part is, individually, both characters are strong on their own.

While I was more of an Eagan before starting it story, I definitely wished December were here by the time I finished. Christmas t-shirts, you ask? Bring it on!
Ok, maybe not.