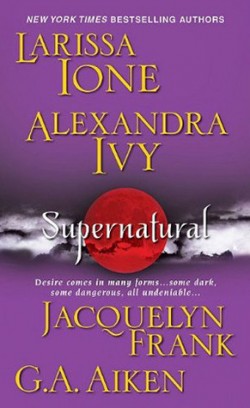 This has been a highly anticipated anthology for me. Yeah, that’s saying something considering I usually don’t care much for short stories. But how often can I say 2 authors I love are in it and the other 2 are also supposed to be really good? My point exactly! I’ll review them individually but just know that if for nothing else, I’d recommend this book for Ione and Aiken’s stories!!

I loved this story! Set in the Demonica/Lords of Deliverance worlds. We have cameos from our favorites from both series. Of course this story involves UGH because that’s where Vladena originally works. After her brother comes into UGH pretty beaten up and dies they all start an investigation into where this all happened. As it turns out, there’s a secret Fight Club, and no, it’s not only vampires, there are plenty of shifters who fight in these underground events. That’s what Vladena is, and her brother was. But she has a disadvantaged, she can’t shift. And that is genetically a death sentence. She’s almost come to terms with that. And now she wants revenge for the death of her brother.Nathan is a vampire and leader of the Fight Club, but he’s not the head honcho. He’s someone else’s puppet. And he has a lot of anger and resentment for things that were done to him that destroyed his soul. He’s seen it all, nothing entices him anymore. Except when he sees Vladena, he wants her.We get cameos from Eidolon, Shade, Wraith and even Con! As well as a BIG revelation at the end which I’m sure will play a part in the Lords of Deliverance series. See, Nathan is a day-walking vampire, and the key to that is who made him.

I’ll be honest I have not read Guardians of Eternity, and this was actually my first read by Alexandra Ivy. I did like it, but I wasn’t glued to the pages for it. Uriel is a vampire warrior and he hates jinns because one put a curse on him years ago during a battle and told him he would be his instrument in defeating his enemy. So he’s lived thinking he can’t be trusted around his own people in the event he will betray them.Kata has actually been imprisoned by her sister and her mate, and when her sister finally dies and she believes herself to be free and able to search for her child. But Uriel is sent for her. And the attraction is immediate.Except they are not home free yet, as it turns there’s a trip into hell in their future. Along with some pretty hot sex.

This story was interesting, I liked the writing style, there was some romance, some steam, some action. I will definitely be reading more of her work soon.

OK… I have not read the Nightwalkers series but I have read Ms. Frank before, and I feel that in this story she did not get my interest. At all. I found myself even skimming through parts of it. *hangs head in shame*

Kane is one of the young ones, he is not 100 years old yet so he’s still considered a child. They are not allowed to touch humans, but his desire for Corrine brings him to barely touch her one night. Just a soft caress. He is immediately forced to wipe her memory, he is punished and she is left alone. Except that touch started a change in her and she now needs to be close to him to live, and being forced apart for so long has made her very sick.

Now, having him shackled to a bed might not be a bad way to wake up, but she does have a lot to understand, and in a short period of time. They manage to do it mostly through his mind powers and her ability as his mate to read some of his thoughts.

Oh the wonderful world of Ms. Aiken’s writing! I am currently reading the Dragon Kin series but even though this is #4.5 it really could be read right after book 1 as this goes back in time not to the current set of brothers we are reading about, but their parents. In this case their aunt Ghleanna the Decimator.

She is the ultimate warrior chick, nobody mess with her. She knows she should need a mate that is as strong as her. But when she is tasked with escorting and protecting Bram, the smart and peacful dragon who writes up all the peace treaties that end her wars, she finds herself reconsidering that.

Ghleanna and Bram are just adorable, funny, sexy, hot and so damn entertaining! You can’t help but love them! This story might just be my favorite in this anthology!

Great review! now I really want to listen to this audiobook, I’ve been waiting for to come available on audible, but now I’m really anxious.
I have to read the last Dragon Kin by G.A. Aiken (The Dragon Who Love Me) book, that’s a great series.

I didn’t even know this was being released on audio!!! I had to have it the day it came out so I got the ebook. LOL Hope you like it! If you like the Dragon Kin series you’ll love the story in this one.

Anthologies can be a good thing or a bad thing in the sense that you can have several of your fav authors all in one book. It can be a bad thing when those same authors, while writing a kick-butt novel are not so good at short story form.

One of my favs in this book and your review has peaked my interest in a couple authors I haven’t read.

I do love anthologies. I bought this one for Larissa Ione’s story (LOVE her!) but am really excited to be able to try some other authors, including Jacquelyn Frank. Thanks so much for the giveaway.

This sounds like an awesome anthology and what a group of authors! Thank you for sharing with us today.

Great review for all of the shorts. It’s not easy finding an anthology that can pull that off. Another one just may topple the pile…

This was a pretty good grouping! Hope you girls like it when you get to read it!