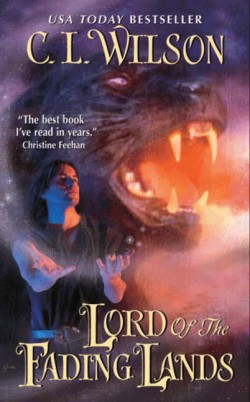 Lord of the Fading Lands
by C.L. Wilson

This book just proves adage “Don’t judge a book by its cover,” the cover may look like your teenage sister has just got hold of photoshop for the first time but what is inside was fantastic. I really wish I had started reading it when I first bought it at the beginning of the year, instead it has been languishing in my kindle.

Set in a fantasy world full of the Fey, dark mages and magic, Lord of the Fading Lands introduces us to Ellysetta Baristini the adopted daughter of a master woodcarver and considered plain, awkward and more then a little strange by most. Ellie is fascinated by the Fey and their King, Rain Tairen Soul but never expects to see him in anything but poetry and art, but he is visiting Celiera for the first time in a thousand years as he hears his one true mates cry of pain and is determined to find her.

This book had a mixture of two of my favourite genres fantasy and romance, I really enjoyed it. The writing was fantastic and drew me effortlessly into the world the C.L. Wilson has created. It is a fantasy world with a medieval feel to it with kings and queens and magic in it, it also revealed enough of the history to give you the feel of the world without bogging you down in too much detail.

But what has made me like this book most was the characters of Ellie and Rain. I am not normally a fan of books with Fey in them I tend to avoid them and leave the Fey for YA readers and make a grab for shifters and vamps instead, but Rain may just change my mind. He’s mad, bad and a little crazy but you have got to love a guy who raises a woodcarvers daughter to Queen of the Fey and daring any one to say differently. The character I liked most though was Ellie, I could feel her bewilderment and uncertainty at her sudden rise in life and I admired her courage for just getting on with it with no moaning.

What was also fantastic was the growing storyline about the rise of the dark Eld mages who are slowly taking over Celiera through an insidous and silent campaign of fear and corruption, I can’t wait to read the next book to see what happens next.

This was a great read which I had trouble putting down a good mixture of fantasy and romance that I have feeling is going to be one of my new favourite series.

C.L. Wilsons unique blend of pulse-pounding action, sweeping epic fantasy, and passionate romance has made her books a favorite read for romance and fantasy readers alike. Praised for exceptional worldbuilding and lyric prose, her critically acclaimed novels have regularly appeared on bestseller lists including the USA Today, the New York Times, and Publishers Weekly.

C.Ls novels have won numerous industry and reader-selected awards including, LifetimeTV.coms Best Paranormal debut of 2007, the Gayle Wilson Award of Excellence, two National Readers Choice awards, the Colorado Award of Excellence, and the Holt Medallion. Ms. Wilson is the honored recipient of the PEARL award from Paranormal Romance as the best new author of 2007, and winner of the 2009 PEARL award for best Romantic Fantasy novel.

When not torturing her characters mercilessly, C.L. enjoys relaxing with her family in sunny Florida and daydreaming of a world where people exercise in their sleep and chocolate chip cookie dough ice cream is a fat burning food.

I enjoyed this series. Started it long time ago and had to wait for the final book to come out, worth the wait…not fantastic but worth the wait. And Wilson sets up story lines for more books centered on other characters if she wants to keep going.

Like I’ve told you many times I LOVED this series! Cheryl’s books are nothing short of fabulous IMO. It was torture waiting for the different books to be released and then she couldn’t fit the story into the original 4 books so she made the series into a “quintet”. Queen feels a little off because of the difficulties that she had but Crown was worth it! I immediately reread the last 100 pages or so b/c I loved it soo much.

Random Thoughts of a Romance Blogger: Ugly Covers - Under the Covers Book Blog

[…] example, one of the more popular fantasy romances and a book I would highly recommend: Lord of the Fading Lands by C.L. Wilson, the first in the Tairen Soul series. It doesn’t matter that how romantic the story is, which it […]