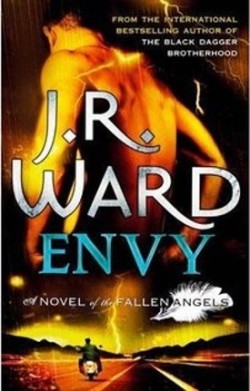 Caldwell is the PNR/UF version of Sunnydale (from Buffy, just in case you live under a rock!), all the supernatural shit goes down there! You have a Brotherhood of vampires and now we are battling demons to make sure Hell doesn’t come bubbling up. Sounds like a crappy place to live, you are likely to either be killed by the Omega or have your soul destroyed by a demon; however, the payoff may just be worth it, Caldwell also seems to be the centre of the hot-man-universe packed full of gorgeous males so manly they make Arnie shrivel up, so yeah it may be dangerous but we are on the Oestrogen Express on our to Caldie!Annnnyway in this book Veck is back and he’s made a lasting impression!At the beginning of Envy, Veck is in deep shit. Nursing a killer headache a la vampire (not that he knows that!) he finds himself overlooking a body that looks to be mauled by an animal. He calls 911 to report the incident. But when questioned later about the events, he can’t seem to remember anything at all without his head pounding like he’s been hit across the noggin’ by a two-by-four. But the real problem is this aching suspicion that maybe he was the attacker…

Enter Sophia Reilly, Veck’s new assigned partner from Internal Affairs. Sparks are instantaneous between these two and it’s no wonder, they have amazing chemistry. What was fantastic about Reilly was that fact that she was a straight-shooter, take-no-shit kind of woman who knows exactly what she wants, but also a normal woman as per her hilarious and completely understandably pervy thoughts about Veck. She has her confused moments where her head and her heart clash, and yeah maybe we did want to brain her a little. But all in all, the girl’s got something good between her two ears.

Envy has managed to strike a good balance, in Covet there was a lot of romance and in Crave there was a lot of UF, but this book has the perfect bland of both elements of this series. It manages to move the main plot with Jim et al on, with a few really shocking twists, seriously this book needs a Kleenex warning, but it also has a really great romance in it as well. What is also great about this series is Devina, we love that we hate her, she is a bad guy that you can get properly riled up about, she isn’t half assed about being evil she goes all the way and not only that; she poses a credible threat. There is nothing more off putting then a bad guy that can be defeated by your 5 year old nephew with a big stick, Devina isn’t one of those!Colin and Nigel deserve a mention. Once again JR Ward has managed to make a tricky subject into the mainstream, Colin and Nigel’s relationship was oh so human yet complicated by angelic concerns. I hope we see more of the two of them; it is like she has snuck in an extra romance and how they deal with the future battle will be interesting to see.

Now Jim and Sissy. There is an age difference Sissy is 19 and Jim is 40, although Sissy’s time with Devina has got to add an extra 1000 years to her age, but we so long for them to get together or have some kind of HEA, she is his Sissy and they thoroughly deserve each other. And the ending with Sissy’s mother, Susan, was great. Both draining and hopeful, Ward can break your heart with a few turn of events and then mend it back together with a few simple words.

Simply put we loved it.

Envy is UTC favourite of the Fallen Angels series so far. With a hero like Veck and an admirable heroine like Sophia, it was easy to fall in love along with them. But it’s the war between heaven and hell that’s got us jonesing for the next in the series. Bring on the next book!

1. Escalade flying past at the beginning; getting the Butch vibes!

2. Throe right at the end doing his Grim Reaper impression

J.R. Ward is the #1 New York Times bestselling author of numerous novels, including the Black Dagger Brotherhood series. She lives in the South her family.

I just wish Sissy was a little bit older. My husband isn’t even 40 yet and to imagine him with a 19 year-old makes me queasy.

The Ad-Eddie-and-Jim stuff really tied me up in knots. I am dying to see what happens next in their storyline.

I liked Nigel and Collin in this one too…I’m so glad I liked this book! I didn’t love the first two

I love JR ward so i’ll definitely be checking this series out. I loved your review btw, you make it really fun to read 🙂