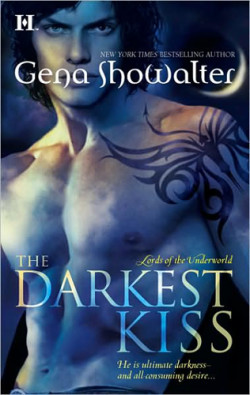 The Darkest Kiss
by Gena Showalter

We are officially forming a We Heart Anya club! It is only two books in but she is our favourite! With her penchant for dressing up in saucy outfits, her love of lollipops and her sassy attitude what’s not to love? And, we believe she would completely agree with that statement, self-depreciating and humble she ain’t. And now Anya has set the Keeper of Death, Lucian in her sights and she wants him. Bad.

Lucien the scarred and sweet smelling Keeper of Death doesn’t believe a beautiful woman like Anya would be interested him. Who would want to be with someone that keeps takes regular trips to hell and as part of his grim reaper job? And then there are the scars and the mismatched eyes. To even think that a beautiful goddess like Anya would want him is inconceivable to him. Surely this must be some new trick of the gods? Despite this he can’t stop his helpless attraction to her.

This was brilliant, although we enjoyed Maddox’s book *Suzanne drools* Lucian and Anya’s book was a little better. Anya was a much stronger character then Ashlyn and is one of those heroines that you will always remember and perhaps even outshines the hero a little bit. We at the We Heart Anya club agree that she was not only hilarious with a completely wicked sense of humour and a fab sense of style but she was also fearless and protective of those she loves.

Not to say that Lucian was a slouch! That man was hot! He may have a deliciously scarred face but he has a delectable body and an intense personality. Lucian is the leader of the Budapest Lords and he has a quiet strength that they all rely on as well as being completely kick ass of course. Anya and Lucian’s personalities complimented each other.

Then there is the sex which was flaming hot! They had such great chemistry, Gena really knows how to build up the tension between them, right from the very start when she is tempting him to dance with her you could feel the sexual attraction between them.

And of course William we cannot forget him, nor would he let us. He is like a male version of Anya, beautiful, irreverent with the ego the size of Everest. But we love him! Him and Anya have some great banter between them and we just want more, More, MORE of him!

There’s just one thing that we wish there was more of in Showalter’s writing. She has created demons like Violence and Death, but there’s actually not a lot of that in the book. Sure, there are a few fights here and there and someone dies. But with their big bad reputation and their tough ass attitudes we expect it to be played up, they are possessed by demons, where’s all the violence *Suzanne: ummmm Maddox*?

Woohoo! I love this series and Lucien was incredible. Anya is definitely one of my favorite heroines too. Her personality deserves its own book LOL! She was great, I want to join the club 😀 I do agree about them being demons, but they aren’t too evil. But I think that has a lot to do with them having thousands of years of trying to put their demons in place. I just can’t blame them for unleashing all the power of their demons. I don’t know, maybe it is just me. Nonetheless, this was a great book. Showalter is one… Read more »

At first,I felt sorry for this book wasn’t about Maddox and Ashlyn,BUT after a few pages I sooo loved it. Definitely my fav book of the series!! Gena such an incredible, talented writer

I want one of Anya’s lollipops. I haven’t had one of those in forever!

I’m enjoying all these reviews!! I haven’t read any of Gena’s work. This is a great way to be introduced to her books!!! Thanks, UTC Team for the great reviews!!! 🙂

Looks like I will need to start from the beginning. A marathon read session will have to commence. Great review to get me started with also.

I love Lucien. Can’t go wrong with any of them