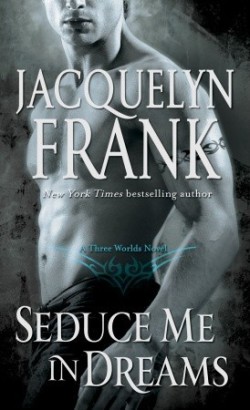 Seduce Me in Dreams
by Jacquelyn Frank

I have always wanted to read a book by Jacquelyn Frank. I think a lot of that has to do with the sexy covers. So when I found this on audio recently I decided to give it a try. I actually had NO clue what the story was about going into it so I was a bit surprised to find it had a bit of a sci-fi romance theme.I do think in general those are hard books to write without getting a little cheesy, but I think Ms. Frank managed to write an interesting enough story. Of course we have an interplanetary military force of sorts, and one of the best teams is led by Bronse Chapel. He’s your typical military guy. He lives, breathes and sleeps his job. He’s good at what he does, but usually not much else. He is a bit lacking in the communication and interrelations department, and he only manages to have a good rapport with his team members. He tried the marriage thing, didn’t work. But now, someone inside his own organization wants to kill him. He doesn’t even know what he did, what he knows or why they want to eliminate him.

There’s someone out there that senses his dilemma though, and she needs his help to escape herself. She is Ravenna, a member of the Chosen Ones, which we slowly learn about throughout the book but will become very important I think in later books. They are powerful beings. Each one has a different power. Her power is visions, to be able to see the future. She was captured along with her brother. And she knows Bronse is destined to come rescue her.

She first comes to Bronse in his dreams. Beautiful, ethereal, at first he thinks he’s going crazy. But she leads him to her. They are immediately enamored of each other, even though they have to hide it so others don’t suspect that he knew who she was before the rescue. His job, and his teams’, is to protect the Chosen ones they’ve managed to rescue and to unmask and defeat whoever is trying to kill Bronse.

The pace of this book was a little slow for my taste, and it definetely had a certain something missing (spark?) that I can’t put my finger on. The world building was really good, I do want to read more about where it will go from now on.

I also think it’s worth mentioning that this book changes perspectives throughout the book with some of the team members. So at times you might yourself in the head of the first in command, or the pilot, etc. At times it was interesting, at times it felt a bit out of place and non-related.

And onto the side characters, I’m intrigued to read more about all the Chosen ones. A lot of them are still young, so it might seem wrong, but I actually thought it was really cute to see Ravenna’s younger sister crushing for Masin, Bronse’s first in command.

To sum it up, I did find it interesting, it had some hot scenes, I liked the hero, the heroine was ok, and the world is interesting enough for me to continue on reading!

I’m in an IRL book club and this is one of our August picks. I LOVE sci fi romance, but good ones seem to be hard to find. Great review.

LOL! You said it best. What is really getting me are the hot covers. Sorry the pace was slow yet again. I will be cautious of this one though. Ok heroines tend to piss me off sometimes LOL! Nonetheless, the world sounds great and I can’t wait to get into it. Great review, thanks again 🙂