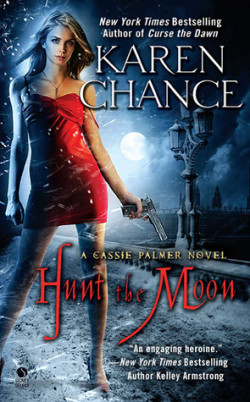 Hunt the Moon
by Karen Chance

Another day, another murder attempt, it is all getting rather old hat for Cassie Palmer the soon to be coronated Pythia. After killing Apollo she thought the crazy attempts on her life would be over but as Cassie says so succinctly in this book: Crazy is what we had for breakfast when we ran out of Corn Flakes. and this book further extends the whole mad-crazy status of her life.

Like all the others I really enjoyed this book, in fact I think it may be my favourite book so far, it had the fast paced action and completely gob smacking situations that Cassie some how finds herself in, but I thought it also had that little bit extra as well. We get a lot more insight in to Cassie’s past and how that has effected her, which has given an already well drawn out and interesting character some more depth, but as well as this we get a nosey around the two men in Cassie’s life pasts.

Mircea and Pritkin, I think everyone has their opnion on who they like the most (GO PRITKIN!) but how much to we really know about them? If you have read the Dory series you will probably know a bit more about Mircea, but in this book we get to have a look at the man behind the Master vampire, and WOW I almost swung to Team Mircea. Until of course Pritkin crashed in to the book and then I was firmly with him again, feeling only a little guilty over my wavering : D This book also has Pritkin revealing more of his mysterious and hellish past. This book also highlights the big differences between the two men. Mircea wants to protect and shield Cassie, frustratingly so at times, where as Pritkin pushes her to look after her self, and when I say push I mean that quite literally, in the first chapter he pushes her off a ledge of a mountain to see how she would react!

Also, did anyone realize Mircea had a foot fetish? How did I not know that!

This book ends on a bit of a cliffhanger and I now can’t wait for the next installment as they just seem to be getting better and better.

Which Man do you prefer? Here are some quotes to help you decide!

The white terry cloth had made his skin look darker than normal, a deep rich caramel, but I didn’t miss it. Not with the fire painting intriguing shadows on a body that was already intriguing enough. It gilded his muscles, cast a very incongruous halo around that adrk head and licked at the smug smile hovering about his lips. He took longer undressing than strictly necessary, because he was a bastard and a tease and because he clearly had no problem with nudity. I kind of suspected that Mircea liked nudity. Of course, if I had a body like that, I probably would, too.

Pritkin was annoying, stubborn, secretive, impatient and rude. He had the tact od a Parris Island drill sergeant and the charm of a barbed wire fence. He regularly made me want to slap him and other people want to shoot him, and that was without even trying. I;d probably yelled at him moe than anybody else in my entire life, and I’d known him less then two months. And yet he was also loyal and honest and brave and weirdly kind.

And here’s another one cos I know you are all ho’s and like a bit of smut!

It was sensory overload, hearing the sounds he made deep in his throat, smelling that particular mix of sweat and gunpowder and magic that may as well have been his signature cologne, feeling the assault of that mouth, all wet, silken heat and fiery passion, nothing safe, nothing sane-
And then he gently bit down.
And oh dear

Come and check out our Fantasy Cast of each of the characters HERE!
Did you like this review? If so, please tell us your thoughts in the comments below! 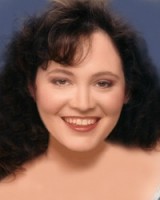