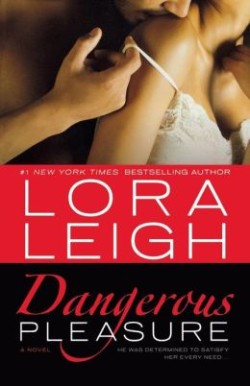 Who would’ve ever thought I’d be reviewing a Lora Leigh book and saying “What the hell happened??? Noooooo steam!!!!“. But I am sad to say I was extremely disappointed with this book. After the last few books in this series have been really good, really steamy, with great plots, great characters and over the top excellent sex, I expected a really good read.Instead we get this washed out story, with like 2 or 3 sex scenes TOTAL in the whole book, and that weren’t even that steamy! First of all, I didn’t like our heroine Paige. She is too immature, and being paired up with an older guy (I think he’s 37?) I really thought she would be a little more grown up mentally. We’ve had much better heroines in this series, and she just can’t compare.Abram is the hot, brooding alpha male, who has been through a whole lot and doesn’t want to form any more attachments. He has been the cause of the deaths of his previous wives, and to think that if he gives in to his weakness and takes Paige he would be endangering her, more than she already is, is unthinkable.

Paige is actually Khalid’s half sister. Abram is Khalid’s half brother. But no, Paige and Abram are not related! However, it does make for a messy situation, and Khalid, who I loved in his book Guilty Pleasure, was starting to piss me off with how he was handling their feelings for each other.

Is it really bad to say that the hottest sex of the whole book was the opening scene, when Abram and Tariq are actually having sex with a different woman? I just didn’t feel the chemistry between the two.

The rest of the storyline was a bit boring in general. I miss the Club!!!!! Please, let’s just go back to what works best! Ms. Leigh also introduces more members of the Mustafa extended family in this one, and I think they are hinted as possible future books (like maybe Chalah and Tariq) but I wasn’t that interested in their characters either!

You know what I really want to see? I want to read Daniel’s story! Now he seems intense! I think we need some fresh blood in the characters of this series!

As usual, I find inconsistencies in the story, and one that kept bugging me was the fact that at the beginning of the story (opening scene) Paige is about 21. It is then mentioned (as a passing thought) that Abram started noticing her as a woman when she turned 18. Then after the events that happened at 21 there’s a “8 YEARS LATER”, but instead of Paige being 29, she is 25. But what happened between them was when she was 21! It should’ve said 4 years later!

Anyway, I will still, of course, continue to read this series. I do have faith that this was just a little mishap and it will not be repeated!