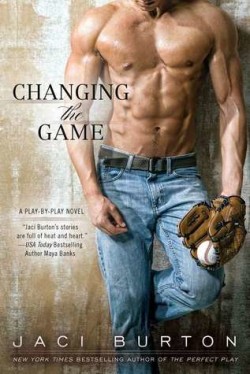 Changing the Game
by Jaci Burton

WOW! I devoured this book! It must’ve been all the excitement and anticipation, or maybe just the fact that for the first 50% – 60% the chemistry and raw sensuality between Liz and Gavin was just amazing! Of course, there’s the sinful cover to consider too, which I kept picturing every time I read about Gavin.I definetely shouldn’t have started the book in the morning BEFORE going to work and then reading DURING LUNCH. You do not want to have your co-workers wondering why you’re biting your lip and making weird noises. But Gavin just had me in a bad state all day.

I *think* Gavin is my favorite Riley brother. He is just amazing, as I said before… He.Is.A.GOD!!! Oh so talented, creative, daring…. *sigh* There was nothing I wanted more than to have his attentions and to be his goddess! He truly made Liz feel special from the beginning. I liked that! I didn’t think for one second that he ever treated her as a one-night stand, or a fling.

Now, that being said, he was a little immature about some things throughout the story, but he’s entitled, he’s only 29!

I came to understand some of where Elizabeth came from, however, I don’t think that part of the story was developed much, there was only one conversation where she truly opened up and the way it was built up before I thought it would be a little more dramatic. However, she has had a rough life, she’s amazing for having come so far and being so successful on her own. But she is also very insecure, and a lot of that shows up in this book. She has to protect herself before someone else has a chance of hurting her.

Talk about FIREWORKS between these two!!! Scorching hot!!! Favorite scenes that deserve to be mentioned and you’ll just have to wait and read the book to get the details: the scene at the restaurant *THUD*, the scene on his porch overlooking the beach *DOUBLE THUD*, at his St. Louis house the first time he saw her after Florida *MELTING*

Now all that out of the way (and you should absolutely read this book for that alone!) I had the same problem with this book than I did with the first one. After a certain point after half way through I was a little bored.

Ms. Burton has managed to write the sweetest, most perfect guys for this series (along with THE HOTTEST covers), and sometimes when they are OH SO PERFECT and everything is roses it can be a bit tedious. Ha! I can’t believe I just said that.

The honorable asshole mention in this book goes out to Mick Riley. I understand why he had a problem with Liz. Yes, what she did to him, Tara and Nathan was messed up. But what he did (and kept doing) to her was more hurtful.

And the cutie alert!!!!!!! OMG I was melting for Ty from the moment he first came on the story. I can tell his book will be a complete panty melter. Even if when he met Jenna he said she wasn’t his type because he liked women with bigger boobs.

The ending was excellent! Gavin redeemed himself 100% and I think my heart skipped a beat along with Lizzie’s.

Jaci Burton is a New York Times and USA Today bestselling, award-winning author of over 50 books. She lives in Oklahoma and when she isn’t on deadline (which is often), she can usually be found wrestling with her uncooperative garden, wrangling her dogs, watching an unhealthy amount of television, or completely losing track of time reading a great book. She’s a total romantic and longs for the happily ever after in every story, which you’ll find in all her books.

I read the book in one sitting the same day I received it. O M G!!!! It’s going to be a favorite as it’s predecessor. To be read and re-read when the mood hits…..lol. Just like you, can’t wait for Jenna to have her day. Ty seems to another toe curler type of guy I can’t wait to read about. These Play-by-Play books get my heart racing in the most exciting way. Thank you Jaci Burton!

kcaid, toe curlers for sure!! Did you read the teaser for Ty’s??? Of course I HAD TO and I think he is so cute and hot and adorable…. March just seems so far away.

Note to self: Do not read this book at work.

P.S. Good thing I don’t work. Only when the mood strikes.

Thanks Artemis, lucky you!!!!

lol Yeah I don’t think this is the kind of book I would read at work during lunch and such. :p

Great review! I still have to read the first one. I have it, but, well, you know how it goes — too many books so little time and all. lol

Love, love, love this series. I didn’t think she could do it but she redeemed Liz for me.

Great follow up to The Perfect Play. Changing the Game is now my favorite of this series. And Gavin..hot!

And Mick..well yea the honor you gave him was well deserved. Ok hottest male possessive quote ever moment for me…”And now you’re mine. Do you understand that? You don’t give this pu**y to anyone else while we’re playing. You’re mine now.”

I think I literally melted in a puddle when he uttered those words…SIGH!

@Ing, I melted at that quote too! This is my favorite book of the series so far, but like I said… Ty has A LOT of potential.

@Sarah, yeah I know I shouldn’t have been reading it at work, but I was just sooooo excited it had just released. I couldn’t help myself.

Great review! To think I just bought the book solely for the cover…

These reviews are great. I can’t wait to read these books back to back.
Carol L
Lucky4750 (at) aol (dot) com

ARC Review: Straddling the Line by Jaci Burton | Under the Covers Book Blog