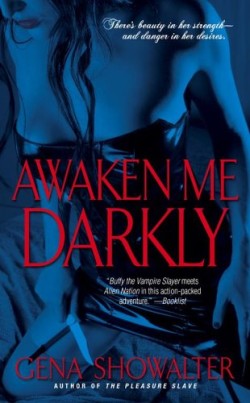 Awaken Me Darkly
by Gena Showalter

Mia Snow is a Huntress, she hunts down aliens who have committed violent crimes on humans and executes them, and her most recent case, where a man shows up dead and posed in a seedy alley is no different, she hs to find the alien responsible and execute them. Only things aren’t quite what they seem, especially with a certain handsome but deadly alien, and the case soon becomes really personal.

I think this book starts of really well, she sets up an interesting futuristic world where aliens now live openly among us. However, some aliens aren’t quite as peaceful as others and that is where Mia comes in. And the case is interesting, I wanted to know why these men had been abducted and murdered and I wanted to learn more about Mia and this sci-fi world. But as the book progressed it seemed like the whole thing was being rushed through and one minute you were in the thick of the action and revelations and the next everything was resolved and they all lived happily ever after, the last 5% of the book read more like a list of what happened next rather then a story.

I also felt like I never really got to know Kyrin who was the hero of the story, as it was told from first person POV I think this may be why as we go to know Mia quite well. But Kyrin, he seemed like an after thought and I don’t get how the fell in love I didn’t really feel the chemistry with them. One minute she hated him, the next she didn’t.

There were also plot points left open, which I think are probably left that way on purpose for future books, like Mia’s brother and the children. But I think there needed to be something more between Mia and her father to get some closure on that.

But despite all that I still enjoyed it, the whole thing was a bit different and I just can’t resist the lure of sexy aliens!

I need to begin with this serie soon. I love all the Lords of the Underworld so I know this one will be as good as the other one 🙂

Read this and loved it. Am always looking for the next Alien Huntress book. Have them all so far. can your write faster so I can get them faster :}

I really like this series. Noelle and Hector’s book should be great.