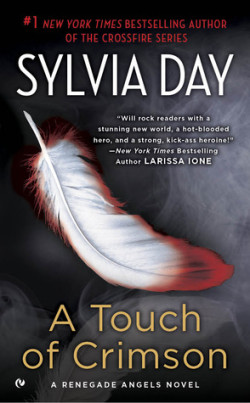 A Touch of Crimson
by Sylvia Day

This book has a really good story! The concept is really interesting. But that being said, I think I was expecting more action, more sex and a little less whining. Don’t get me wrong, I think it’s written very well, and I’d love to see this world developed a bit more, but I felt that there was a lot of standing around talking and dragging things out.So the main idea behind this book is that angels, lead by tall, dark and deliciously handsome Adrian Mitchell, along with their lycan followers (did they really compare them to dogs???) are at war with vampires. The first vampire was created by Adrian when he fell for a mortal, and sex between an angel and a mortal is not allowed, so Adrian punished him, and he became the first vampire, Syre. He is now Adrian’s biggest enemy.But centuries ago, Adrian actually fell in love with Syre’s daughter, Shadoe. He went against everything that he preaches and enforces and had sex with her, until she was badly injured and he brought her to Syre so he would heal her (she was a mortal at the time) and all Syre could do was turn her. Adrian couldn’t deal with seeing his woman becoming a vampire, so he actually killed her before she was able to complete the change. But she has reincarnated through the centuries in other womens’ bodies and always come back to him.

She now comes back to him in the body of Lindsay Gibson. Lindsay has always known that there are evil beings out there, and has made it a purpose in her life to kill them. She has super speed and she can sense evil. Except the only thing she senses when she spots Adrian Mitchell at the airport is all kinds of naughty thoughts about someone so perfect and completely out of her league.

Now imagine her surprise when he comes after her, and shows so much interest in her. But she soon discovers that he’s an angel, and there are even more things out there than she could imagine. He can help her be prepared to face them.

So basically the story revolves around her finding out about this new world through whatever Adrian wants to tell her, and her new personal bodyguard, the lycan Alpha, Elijah. They actually become best buds, and I thought their relationship was cute. In a way, she connected more with Elijah than with Adrian.

Once Lindsay found out the price Adrian would pay to be with her, she couldn’t let him do it. She felt like she was just another burden in Adrian’s shoulders, when there was already so much for him to deal with.

In the end, it was a bit of a ride. I felt that at times things would pick up and I was very interested, and then it would lose me completely, and this kept repeating. The beginning was a little weak, so just push through, there is chemistry between the hero/heroine so once you get to those parts you’ll enjoy it!

I have to admit, I’d buy this just for that gorgeous cover! Great review.

I just finished this last week. That is the next review for me to work on. I do agree on somethings, but it is the first in the series so I understand it is trying to get us in the world, there is definitely more to come. I totally agree about Lindsay and Elijah, she connected a little more to him than Adrian. I loved Adrian and Lindsay together, but her and Elijah friendship was nice because you can see how much she got to him. They were very adorable. I loved all the characters though especially Lindsay. For her… Read more »

Thanks for sharing. I’ve been curious about the romance factor. I’ve heard that it’s more urban fantasy than paranormal romance thus the romance in the book is minimal. Your review says pnr and the review sounds like a pnr book. I really hate finding mixed info on something I’m interested in. I’m just gonna buy this and see for myself. I do trust your reviews & your review makes me want to read the book.

@Diana, yes it is the first in the series so it does have all that world building and story setup. But I did think it was a bit slow.

@Vanessa, I hope it doesn’t disappoint! The romance factor is NOT very high. As I said, I think there’s more of a connection between Lindsay and the alpha of the lycans, Elijah, than her and the hero. But I wouldn’t put it as UF.

Great Review! Its definitely on my ever growing TBR pile….

Sounds like the story almost lives up to the cover. Thanks!

Thanks!! Hope you enjoy!