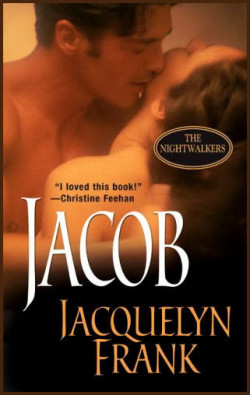 I liked this book, it reminds me of the Demonica series in the sense that I like it bit I don’t LOVE it. It doesn’t inspire me to build shrines and write poetry and become genrally obsessed, not that I do that of course! *quickly hides Black Dagger Brotherhood and Immortals After Dark Shrine* But I did like it, it made me laugh, it was romantic and it had a little bit of action in it as well.

Set in a world where there is a whole different group of species collectively called Nightwalkers, this series is about Demons, but not the evil burning-in-a-fiery-pit kind, these Demons have a strict moral code and Jacob is the Enforcer who up holds these, seen across his race as the bogey man he lives a fairly solitary live. Until Isabella literally falls into his arms and not only turns his world upside down but also shakes up the whole Demon species as she uncovers some hidden truths.

Bella and Jacob! That brings back some bad Twilight memories, if there was an Edward in there I would have had to put the book down! Luckily there wasn’t so I was able to read on! Unlike the Twilight Bella and Jacob, I actually really liked them in this book, I did have a few issues with Bella at first, I mean she literally falls head first out a window, she wasn’t pushed she just…fell! I mean that is like TSTL personified, I had to put the book down at that point and just laugh it out! But apart from that I actually found myself quite liking Bella, she was sassy and funny and I liked that we didn’t have lots of pages of her fraking out about the whole Demon thing, she adapted quickly and well. And who wouldn’t when you have the gorgeous Earth Demon Jacob there to protect you and give you orgasms? I really liked him, he was a little tortured and also loyal and noble and lets not forget fricking hot, just my kind of man.

What I also liked about these book apart from the gorgeous Jacob was the new world the Jacquelyn Frank is building up, the Nightwalkers have lycanthropes, vampires and other races for Ms Frank to play with and I know she has done another series with some of these different races in them. I loved how she changed Demons so they were more like elemental beings with each Demon having power of certain elements I thought it was a great idea. I also can’t wait to see what happens in the next book as the necromancers, the Demons enemies come back to try and destroy their race.

What put me off a little about these books is the writing style. I found it a little strange Ms Frank has a very descriptive flowery writing style and I found some of the descriptions to long and felt that they were a little over the top and strange, like she had the thesaurus out and was trying to make the sentences sound all fancy. But this style also reflects the Demon’s themselves who area little old fashioned in their speech and in their customs.

But a good read, I really should have started reading it alot sooner, definitely a book I would recommend.

Absolutely love this book. I’ve read it so many times it’s not funny