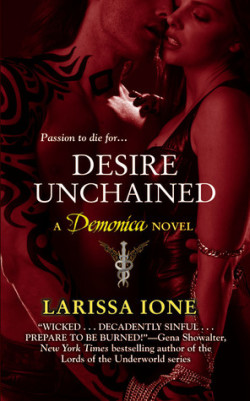 WARNING! This book contains a hot demon who is always willing to spank the happy in to you!

Shade wakes to find himself chained up and fuzzy, nothing new to him, until he realizes he has been captured by the Ghouls, an organization of humans and demons who pick up demons to harvest their body parts. To make it worse he is chained in a cell with Runa, the human he was seeing and in danger of falling love with until a year ago when he broke her heart. But Runa is different and the new Runa threatens his heart more than the old, something he can’t risk unless he wants to activate his curse and be stuck in eternal damnation.This was such a great book! And a fantastic surprise, to be honest the previous book was a little underwhelming although it was good and we all enjoyed it, we expected more from all the hype that surrounds it. This book showed us EXACTLY why this series is so popular! Shade and Runa are a great couple! Ione is good in that she makes all her characters distinct from one another, Shade and Eidolon may look similar but they both have very distinctive characters. And DAMN Shade is hot, perfect even, he’s all dark and sexy, but he’s such a sweetheart!! He is so intense and I loved how protective he was of Runa. Runa, was great too, we much preferred her to Tayla, although she was just as tough as Tayla in her own way she also had less of a chip on her shoulder, well, apart from when it comes to Shade! They made the perfect match it was a pleasure reading about them together, she’s stands up to him and complements his personality perfectly. And they’re just HOT together!This book also has all the elements of a great book. It’s action-packed, filled with thrilling twists and turns. Being set in a hospital you don’t expect to see much action, but that assumption just gets blown out the water! This series has more action and epic battles then you can shake a stick at! What is also good about these books is that characters from the previous book are still very much a part of the series, Eidolon and Tayla don’t just fade away, there character continue to develop and the bond between the brothers is a big part of the series as well as the romance.Speaking of other characters! KYNAN & GEM! It is the best side story! Wouldn’t it have been amazing if they had received their own book? We are always so excited to read their parts! In this book Kynan is still torn up about the death and lies of his ex-wife, and towards the end when he is starting to come around *fans self*

Desire Unchained is a gripping love story between two people who are forced to be together, but they soon realize that what they thought was a bad thing is actually the best thing that has happened to the both of them.See our review of the first book Pleasure Unbound here!

I loved this book too…I too really enjoy the side story of Kynan and Gem! I’ve only read book 1 and 2, I have 3 sitting on my shelf. Need to read it soon, such a great series!

I LOVE these books! Kynan and Gem better be happening..seriously..for real.

I love all the Demon brothers..this series is amazing in every aspect..
great review
jennifer B