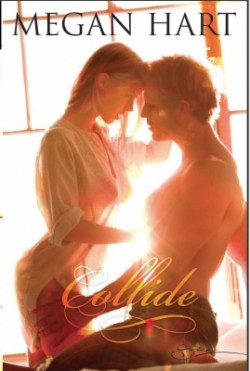 This will be a difficult book for me to review. Let me start off by saying Megan Hart just has a beautiful way with words and a great way of telling a story. Now this story was actually very different and original for me.

Now after all that, I was a bit disappointed with the beginning of this book, it felt a little slow to get going for me.

First of all I started reading this book thinking I might not like it too much because of the time travel aspect. I felt that after reading the blurb this might be a little like Deeper which was not one of my favorite Hart books (even though I know some people loved it). So, as far as that aspect of the story is concerned I was pleasantly surprised. I think Ms. Hart was able to create a time travel scenario that’s very original and well executed in my opinion.

I’ll give you a quick glimpse of what’s going on… We first meet Emmaline, she’s a 32 year old woman who just recently left her parents home (in the suburbs) to live on her own in the city (Harrisburg). She has had a condition from when she was a child that makes her have sort of blackouts. She was doing fine for a while, even venturing out on her own now, except they’re now coming back.

And all in part because of Johnny Dellasandro. She had met ….. at “Cafe Mocha” in Harrisburg, her one and only new friend in town, who introduces her to her almost unhealthy obsession with Johnny. He is now 57, but in the 70’s he used to be a HOT indie actor, and in most of thost movies he was practically naked.

As her obsession with Johnny and his movies grows, she starts having blackouts where she actually experiences what she thinks of as dreams, where Johnny is the star, and she is his heroine. She visits him in the 70’s and all her inhibitions go out of the window since this is just a dream, right?

But are they dreams caused by her condition and the crazy amount of hours she spends googling his pictures and watching his movies, or is it all really happening?

Johnny then was amazing. I could’ve fallen in love with him just then. The bad boy, so sure of himself, with the sexy New York accent, gorgeous body and many talents. I just wanted his today version to be nicer at the beginning. I understood why he acted the way he did at the beginning afterwards, but still I thought he was a douche for a little bit. However, he is one sexy ass and sweet older man, as well as a hot young stud. I loved seeing both personalities played in this book and how he matured and changed.

I liked the heroine, Emmaline. I really did feel bad for how she’s had to live and the struggles in her life. I could imagine that it would be a very stressful situation to black out and not know the reason behind them or what’s happening to your own body or health. She was a pretty fun character as well. I loved her interactions with her friend, …… In that way they were both very relatable characters and they had me laughing out loud.

And I did cry at the end. Call me stupid, whatever! I cried when her mother told her how she got her name; I cried when she had her last black out; I cried when present day Johnny explained to her the truth about his past. I almost want to cry again now writing about it.

This book was erotic, but it tells a story of a life that’s not sugar-coated. This is usually what Ms. Hart does best. Emmaline had issues because of her condition, even with her relationship with her parents. Johnny and his friends in the 70’s obviously had issues (drugs, promiscuity). Johnny was no saint, and there’s the issue with him having kids that are all older than Emmaline. I liked it a lot at times and at others I was just okay with it. I think especially the last 25% of the book was really good. So even though I can’t say it’s a favorite book of mine by this author, it’s definetely worth your time to read it!

Great review. I thought it started off slow as well, but when it picked up – I couldn’t put it down. I cried and cried and cried too. Megan Hart just has a way with words that make them seem so believable and possibly real. I’d read a story by her any day.

Great review, makes me want to read it all the more:)
elliott2668(at)yahoo(dot)com

This is a great review!! Another HOT cover too!! I really wanna read this book!!! 🙂

Awesome review, Francesca! I’m adding it to the list 🙂

I’m interesting in reading this book and all her other books 🙂 thanks for the review!