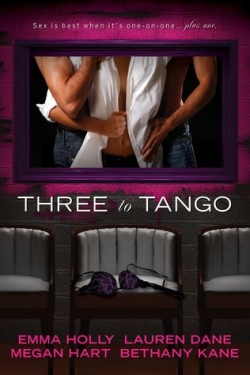 In case you couldn’t tell by the name…. this book is basically four short stories that revolved around a menage, or at the very least 3 people in one way or another. Let me give you a quick warning so this doesn’t happen to you.Do not try to read this book while at work! You might not be able to cover up the blushing, sometimes moaning, and other reactions your body won’t be able to help!

I wish this would’ve been a whole book, it was a great story! Ava comes from the wrong side of town, her mother was a hot mess her whole life, her step dad used to beat her, and she was always under the town’s scrutiny for her mother’s errors. After she graduated she couldn’t take the town anymore and left her sweet little town of Petal, GA and moved to LA in search of a better future. Before she left though, she had a hot torrid affair with Luca, and almost by accident, Angelo, Luca’s best friend. Angelo had a crush on her since forever so he jumped at the opportunity even though she was his best friends girl, and realized he also had other feelings for his buddy in a totally unexpected way. She left them both without looking back. Now after 10 years, and after she’s made something of herself, she has to come back to GA to bury her mother. And the first person she sees is Luca! Sparks fly almost instantly, and when he offers her to stay at his house while she’s in town, she can’t refuse. They rekindled their relationship almost immediately. And can I just say it was hot and then hotter! Once Angelo comes (being summoned there by Luca) they all realize what they had together (yes all 3) was worth fighting for it now. If you are uncomfortable with m/m, I’ll warn you that Luca and Angelo do have some m/m loving in this one, although it’s pretty light (and hot!) You just can’t help but wish you were her! Excellent story! And on a side note, I have a feeling this might be related, or in the same world as, the Chase Brothers series by Ms. Dane. Is it? I gotta get started reading those!

This story was weird and sexy at the same time. Kerry has been dating Jeremy for a while, they actually live together. They have an ok relationship, if not the best. Then Kerry’s high school reunion comes around, and Jeremy won’t go with her. Instead he wants her to get something she’s always wanted. To have sex with Brian, her high school crush. And then come home and tell him all about it. Sound kinky enough? This is the first time Jeremy has brought up this sort of kink, and she’s not sure how to feel about it. But she takes full advantage of the opportunity. After all, she’s wanted Brian for too long. They have one really hot, steamy night together. But Brian wants more! Of course he wasn’t aware that she was someone else’s. Does it make him a total douche if he can’t stay away? She’s been his dream fantasy girl, and he can’t get enough with just one time. They have an affair all the while Jeremy being aware of it, and Brian knowing that after she’s with him, she goes home to Jeremy’s bed. But after two extremely hot weeks he realizes he can’t share her. He wants her too much and it’s tearing him apart to know she’s not his. But will Kerry let him go so easily?

This was my first read by this author and I was actually pleasantly surprised. This was an excellent erotica read, but it fell a little short for me in the storyline and character development. HOT? Absolutely, from the beginning. Shay was kind of adopted by Liam’s family when he was a little boy, so they’ve grown up as brothers, Liam being the older one, and Shay being totally in awe of him. Chelsea was the girl next door they both wanted. And all three of them grew up as best friends. Shay wasn’t aware that Chelsea and Liam had been fooling around until the night before she has to go away to college, when she comes over and they start making out in front of him. Shay somehow joins in the fun with the two of them, and *fans self* IT’S TOO HOT TO HANDLE! Until he makes the mistake of touching Liam. This is the moment that ruins the chemistry for all 3, Chelsea goes on to college, Shay moves away to Boston and Liam stays in New York. Fast forward to current times, Chelsea is back in NY. She’s tried having a relationship with Liam a few times but it never worked out. Now she’s hired him for one of her construction jobs. But he wants her back, and forever. But Chelsea can’t give him forever because she knows she can’t give him all of her, half her heart will always belong to Shay, she just wants them both. So what could happen if Shay comes back from Boston? And how would Liam react now that he’s older? The end was a bit unrealistic for me, in regards to Liam’s attitude and decisions. Which is in big part what ruined the story for me. But the eroticism stayed SCORCHINGLY HOT until the end. And oh yes, another warning for m/m this one’s a bit SEXIER and HOTTER than the first story.

On The Job by Bethany Kane – 3.5 Feathers

Another first time author read for me. I do like her writing style, and this story was also extremely hot, but it was my least favorite of the three. This is almost a romantic suspense. Walker and Madeline used to date years ago, while Tony was in love with Madeline and she only saw him as a friend. But Walker left town, and left Madeline. He wanted to do something with his life, so he could come back and offer Madeline a better future. He joined the military, and is now working with the secret service. This now puts him in direct contact with Madeline and Tony again. Tony is the owner of a huge security company, and is believed to be dealing information with the Russians. He is also supposed to be engaged to Madeline. Walker is assigned to the case and is put in the house as a private security consultant to keep them safe. I did not like the fact that since Walker and Madeline never had sex before, within the first moments of the story he picks her up from her chair while sunbathing, and teasing the hell out of him, drags her to the pool house, handcuffs her to a bar in the ceiling and has sex with her. Really? After all these years, and the “love” you have for her, that how’s you treat her??? Not to mention it was hot as hell, but that’s besides the point. I did not like Walker much, he was too arrogant, and only saw it his way most of the time. And this story is really the 2 of them as a couple. Tony was really not engaged to Madeline, even though he wanted to. There is a WEIRD moment between the three of them at the end, which I thought was totally unnecessary. But I will check out more books by this author for sure!!!