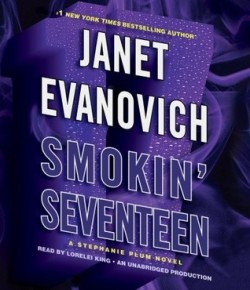 I am both highly disappointed and happy about this book. As far as storylines go, I was glad to see a little bit of a different feel to the chasing skips we get with every Plum book lately. And there are three people trying to kill Stephanie. The skips are crazy as usual, there’s an old guy who thinks is a vampire and sleeps in a coffin at the funeral home, the sleezy guy who always seems to have a boner. The humor and inventiveness was back!

Stephanie is still just as clueless as to what to do. The bail bonds office was burned down previously so they are working out of Mooner’s bus. Mooner! He was truly hilarious! I never get tired of reading his lines. And then Vinny, the slimeball, decides to advertise by making flyers with a picture of Lula and Stephanie, dressed provocatively, and of course digitally altering Stephanie’s breasts. And if that’s not embarrassing enough, the same picture is blown up and painted on the outside of the bus! Can’t miss them now!

And Lula. I love Lula. She’s always wearing crazy outfits, tasering people, and just plain getting in trouble when there shouldn’t have been any!

Now onto my complains. I drool over Ranger as the next girl does. However, Stephanie just PISSED ME OFF. She is sorta dating Morelli. They agree to an “open” relationship. And then Stephanie thinks Morelli grandma puts a spell on her that makes her horny all the time, and the first thing she does…. JUMPS RANGERS BONES! Now… normally I would be all for jumping his bones, but not when she’s dating Morelli, AND if that’s not bad enough, the day after shagging Ranger she has sex with Morelli. And then she goes on a job with Ranger and wants to have sex with him again in his Porsche. What The Hell? When did Stephanie turned into a whore who doesn’t care about anyone’s feelings?

Morelli doesn’t find out, but he’s been on excellent behavior. And Ranger, why would he accept this behavior and just be content with getting Stephanie’s scraps? They both deserve better than her at this point.

Then there’s the Plum family. They are a train wreck, a circus, a comedy show! Stephanie’s mom is trying to fix her up with some other guy who apparently went to school with her. He’s turned out to be a bit of a loser, but her mom has given up hope on Morelli, so she’s trying for another guy. Thank God Stephanie is not interested in bachelor #3. Her mom goes back to ironing.

I suspected who the killer was early on, so I was not surprised at all when we find out at the end. I was not expecting the motives. This guy was nutso!

I really wanted to see a resolution with Stephanie’s love life in this book. I’ve come this far in the series, so I’ll def read the next one, because at this point, I have to know what happens on principle. But I don’t agree with the authors perspective of dragging out the love triangle until the last book of the series. Believe me, you wouldn’t lose readers by letting Stephanie make a choice. You might gain back some you lost. We all still enjoy the humor in these books, we just want Stephanie to mature and stop acting the way she has been and not drag around two wonderful guys. If she has such a problem deciding, I’ll take one off her hands *cough* Ranger *cough*

Janet Evanovich is the #1 New York Times bestselling author of the Stephanie Plum series, the Lizzy and Diesel series, twelve romance novels, the Alexandra Barnaby novels and Trouble Maker graphic novel, and How I Write: Secrets of a Bestselling Author, as well as the Fox and O'Hare series with co-author Lee Goldberg.