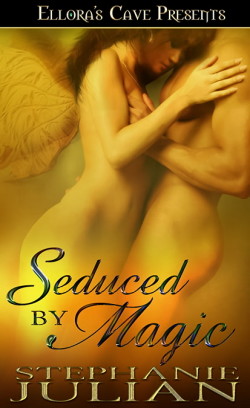 Seduced by Magic
by Stephanie Julian

Justin has always been fascinated with the paranormal, his father used to tell his stories when he was a child and he can’t help feel that there is some truth to them. But being seemingly the only man who believes in fairies isn’t easy and he has been searching for evidence of their existence for years. But he may have got more then he bargained for when he has a strange erotic dream about a beautiful red haired woman with pink fairy wings…A man who believe in fairies? Doesn’t sound too promising; however, if all guys who believe in fairies are as great as Justin then bring ’em on! He was intelligent, hot and funny and I can’t blame Scarlata (Scary to her friends) for falling for him. The chemistry between the two was sizzling, and they literally couldn’t keep their hands of each other, which means it is lucky for them that sex creates magical energy! Being chased through the woods by mad men with guns? Stop for a quick hot shag and you are all set! Not that I minded; although there is a lot of sex in this book it didn’t feel like you were stumbling from one sex scene to the other with a flimsy plot holding it up inbetween.

This book also introduces you to the Etruscan pantheon and fairytales with all the paranormal beings that come with it and has started building up an interesting new world where all the god, godesses and mythological creatures that you have heard about stand a good chance of walking amongst us. This large and potentially complex world sets you up for a lot of future possibilities in the following books and I can’t wait to read more!

Mysteriousbooks was kind enough to bestow upon me the Irresistibly Sweet Blog Award, and I’d love to show my appreciation by passing it on to you.

I know we don’t all collect awards, but if that’s the case I’ll still take the opportunity to say ‘thanks’ for such a lovely blog, and to wish you a wonderful weekend. 🙂

Great review. I have this on the Nook, waiting to be read. Glad to hear it’s not PWOP and has substance. I’ll have to knock this up a notch now!!

I’ve read her Size Matters & loved it! I also had the pleasure of meeting her this past weekend. She is a SWEETIE!

Suz, so glad you enjoyed the story! Thanks so much for a great review.