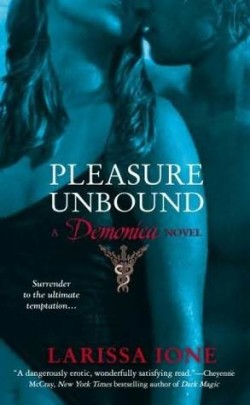 There is a battle going on between demons and the Aegis, humans who are trained to kill the demons. They believe demons kill and rape innocent humans indiscrimately and are little more then evil beasts. At least that is what Tayla Manusco has been told and past experience confirms this. But when Tayla is picked up by an ambulance after being badly hurt and taken to a demon hospital who where she is introduced to Eidolon, a hot demon doctor who heals her, and discovers a few unwelcome truths about her.

These demons are just hot! I love the concept of this series. Just as the author describes it, it’s a perfect combination between Buffy and ER, but with a lot more supernatural creatures! There were loads of different demons who were varying degrees of evil and they even had a demon bible, which was very interesting. I loved Underworld General, the staff is hilarious, the portals, the werewolves, the fights, the aegi deceptions. This whole story is captivating and original.

I love Eidolon! His dark hair, his lickable dermoire and his brains? What’s not to love! And as a Seminus demon, he requires sex often. As if there wasn’t more to love about him! Eidolon is cool, centered, focused, the serious and dedicated brother. He is half Justice Demon. He is also a doctor at Underworld General Hospital and his hunky brothers Shade *cue swoons* and Wraith work there as well. They are all half brothers (same Seminus dad) but by different mothers, so they’re all half something else. All three of them are such well developed characters that I am dying to know more about! He is close to the age when all incubus demons go through the s’genesis and he finds the perfect girl to help him go through that.

The characters Eidolon and Tayla, although were the focus of the story, I didn’t find them the most intriguing characters. However, although they may not stand out in a genre jam packed with similar characters, I still found their story interesting and was eager for them to have their HEA. In the beginning, Tayla is consumed by this blind rage against all demonkind, but after she learns more about the demon world and herself, she becomes more and more open to different possibilities. She learns that not everything is black and white. There are grey areas in between. She learns this through her love with Eidolon and her developing fondness for Gem.

Gem, Tayla’s long lost twin. I love love LOVE Gem! The first line from her perspective is hilarious: “Doctor Gemella Endri was up to her elbows in condoms.” The situation she is in makes it all the more hyterical. But I don’t want to spoil anything! Gem has her own little romantic story going on throughout the first three books.

In that case, I have to mention how interesting Kynan is. I want to learn so much more about him. I feel bad about what happens to him, but it also opens up a lot of opportunities for him as well. Especially when he does the most unthinkable thing at the end.

I cannot wait to see how the rest of the series spans out. What’s so great about this series is that it’s dark and brooding, but there is that light in there too. There’s hope for these characters after all that they have endured. Ione’s got the skills to write the most amazing books and she is now officially one of my favorite authors.

Thanks for the great review. It sounds like there are so many interesting characters and storyline ideas in all of the books. I need to get around to reading this one. 🙂

This is a great series,,I loved everyone of those demon brothers,,,,
Jen

Glad you enjoyed the review, this is a great series ER meets PNR lol! And Eidolon, love him, he is my Demonica man!

Stephanie @ Once Upon A Chapter

The Demonica series is amazing! I’m kind of jealous you’re getting to discover it for the first time! Sin Undone was amazing. Ione is a very talented writer. 🙂

Stephanie
Once Upon a Chapter

Sounds so good! I’ve got this on my TBR list for the month.