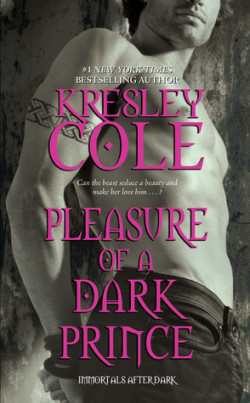 Pleasure of a Dark Prince
by Kresley Cole

Oh Garreth please throw me over your big strong lykae shoulders and take me away… to a cave… preferrably with a not-so-steady-rock we can break together!

I knew when I read Lachlain’s book that I would LOVE Garreth, and it’s official now. GARRETH IS MY LYKAE! He’s just raw power and sensuality, with the perfect mix of emotions. He cares deeply for his mate who has given him nothing but heartache and, in more than one occassion, physical pain. And he still wants her, has crossed the world and faced all kinds of obstacles to get to her and have her! His determination is admirable, his curiosity is endearing, he’s charming and hot and understanding, and…. did I already mention how perfect he is??? You just want to pet him!!!!

She’d been born for him. And I was born to find her.

Lucia is amazing as well. After having gone through a very traumatic experience while still being a child, she has lived milleniums after pretty much repressed and alone and in fear. Except for the past year she’s actually wanted something… or more accurately, someone. Garreth. She can’t get him out of her mind, even though she knows she can’t have him.

And then Nix comes in and throws the whole story up in the air and as always by making a mess of things she manages to get these two finally together.

I loved the text messaging between Regin and Lucia. I loved Nix’s phone conversations and reference to her missing post-it notes! There was also quite a bit of action in this book, some giant caimans, a ghost ship in the Amazon, and lots of hot.wet.half-naked lykae! The next book has been set up really well. We get glimpses of all the kidnapping going on in the Lore, and I have to say… I can’t wait to read about Carrow! Love her already!

“Understand me, MacRieve, I’m a Valkyrie. I’m not bound by your… animalistic needs.” His voice a low rasp, he said, “After one night with me, Lousha, you will be.”

“RegRad: gettng tranqued 2nite with the witches. Bet u wish u were here! LOSER!”

“Fine. We can act like we’re fuckups idling about. As per our usual. But if we cap a god, I’m telling everyone I know! Two words: Press. Conference.”

“Lykae in our backyard. Horde vampires seeking out valkyries all over the world. Happy accession!”