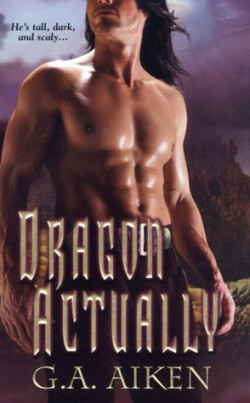 Why did it take me sooo long to pick up this series? I know G.A. Aiken is Shelly Laurenston. And I LOVE HER! I think in a way it was the fact that I’ve never been big on dragons as the lead character in a paranormal romance. But whether it’s the fact that I was wrong about dragons, or the fact that this series has a really interesting and fun storyline. Or that it was written by Ms. “Aiken”. All I can say is that this book was excellent!

Somehow managing to mix incredibly hot shape-shifting dragons, historical war times, battles, intrigue and some hot tumbles between the hero and heroine, as well as a great supporting cast (yes, lots of them dragons as well) I am now officially hooked.

This book contains two stories, so I’ll review them individually.

Oh Fearghus the Destroyer! He is a a dragon of roughly over 200 winters. He has lived most of this time alone in a way, having also little contact with his kin. He is awaken by a battle and a dying beautiful female, Annwyl the Bloody. She is a fierce warrior, leader of a sort of rebel group, with the purpose of killing her estranged brother.

When Fearghus finds her almost dying, all he can do is try and save her. He even calls his sister Morfyd, a healer, to tend to her during recovery.

Except Fearghus presents Annwyl with a human knight whom she thinks is different than his dragon form, and now he can’t bring himself to tell her they are one an the same, mostly for fear of rejection.

Annwyl’s relationship develops with both on separate levels. Her relationship with the dragon is on a deeper level and she comes to care for him, while the knight stirs things in her she didn’t know even could, she was a virgin after all!

While recovering the knight helps train her so that she is prepared to defeat her brother. The dragon makes a promise to help her even going against his family, which will soon come to interfere.

There is a bit of a side storyline and sexual tension between Fearghus sister Morfyd and Brastias, first in command in Annwyl’s army. I can’t wait to read more about these two!

I’m sorry to say I really didn’t enjoy this story. First of all, after the side story of Morfyd and Brastias, I was expecting to read THEIR story. Instead I get a bit of a prequel to Dragon Actually. How Fearghus father Bercelak comes to wed Princess Rhiannon, and why he has her chained to their bedchamber walls, and how come she likes it so much.

I actually liked the grumpy bastard! Bercelak was endearing, being in love with Princess Rhiannon for years, and now given the opportunity to finally have her.

Princess Rhiannon on the other hand? She was just a total bitch from the beginning! She thought everyone was beneath her, her disdain for humans, for family ties, for Bercelak himself!

I understand what she’s gone through with her mother, and now the threat that her mother wants her dead. But this does not justify her actions.

And Bercelak at the end of the day was nothing but sweet to her!

“You should be scared. I’m a dragon, Annwyl. A born hunter and killer. The most ancient of destroyers.”
Annwyl burst out laughing.
“You are so cute when you try to look scary.”
She tweaked his nose with her thumb and forefinger.”

New York Times and USA Today Bestselling author G.A. Aiken lives on the West Coast and spends most of her time writing and making sure her rescued Pittie doesn’t love everyone into a coma. When she’s not writing about sexy dragons, she’s writing about sexy wolf, lion, tiger, and other fang-filled predators under the name Shelly Laurenston. Find out more about this New York Times and USA Today Bestselling authors books at www.shellylaurenston.com.

Wait until you read Gwenveal’s (spelling?) novel. I laughed so hard I couldn’t read the pages! Soooooo goooood!

I can’t wait Dee! I know I’m going to love them all!