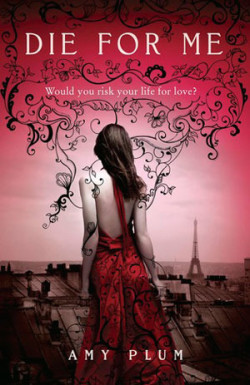 Die For Me
by Amy Plum

I LOVED THIS BOOK! Wonderful debut by Amy Plum and the Revanants series. I felt completely transported into an elegant european world, filled with art, corner cafes where to read and enjoy a cappuccino and a croissant, while mixing in a very interesting group of undead characters!

Kate and her sister Georgia have to move from Brooklyn to Paris with their grandparents after the deaths of both their parents. Kate is only sixteen and finds the only way to cope with the tragedy and the move is to frequent the places she grew loving and visiting in their summer trips. Cafes where she can lose herself in a good book, art museums and galleries where she can get lost in a painting. And it’s precisely at one of those places she meets a boy that takes her breath away. Vincent, dark, gorgeous, 19 year old. Or is he?

I think Kate is a wonderful character. She’s a typical teenager dealing with all the normal issues. Then she meets Vincent and her whole world is turned upside down as she is dragged into a world she had no idea existed.

The Revenants are, in a way, undead or zombies?, but not really. They were humans who died in place of someone else, and from then, they have been dying to save others. I loved that concept! And when finding all this out I actually liked the fact that Kate doesn’t throw caution to the wind right away to be with him. She wants to have a normal life.

Of course there’s always a battle between good and evil which was pretty interesting. Even though the bad guy at the end was almost predictable, I still found the whole thing interesting and the twists we find out of what Vincent and Kate CAN be together are nice. And speaking of nice, what he did for her birthday…. SWOON.

The supporting characters are all endearing as well. Jules, Charlotte and Ambrose in particular. I actually liked her sister Georgia as well. You could tell she loved her sister even though she was dealing with their problems in a non-conventional way.

And now the few things I didn’t totally love, just to keep it fair. I thought the grandparents had no control over what these two girls were doing. How can that be possible? You have 2 teenagers coming and going whenever they please, and doing as they like. Not good. And as I’ve seen a reference before to a similarity to Twilight, I will address that as well. The ONLY similarity this story can have with Twilight is that maybe the structure of the Revenants was a bit like the Cullen family. There’s the elder that rules the crazy “teenagers”, the lonely soul girl “Charlotte” which could be like Alice; the big, tough, flirty one “Ambrose” who could be an Emmett; Vincent obviously being Edward; I can’t put my finger on Jules though, LOL. But that’s as far as it goes. This book really is nothing like Twilight. So there, I just wanted to clarify.

And now… do I really have to wait until next year to read the next one???

And now…. the Die For Me theme song

Amy Plum is the author of the International Bestsellers DIE FOR ME (Indie Next List pick, Romance Times top pick, and recipient of a starred review from School Library Journal), UNTIL I DIE, and IF I SHOULD DIE. The books have been translated into eleven foreign languages. The trilogy is accompanied by an eNovella entitled DIE FOR HER.

Amy grew up in Birmingham, Alabama before venturing further afield to Chicago, Paris, London and New York. An art historian by training, she can be found on most days either daydreaming or writing (or both) in a Parisian café. Visit her at http://www.amyplumbooks.com and check out http://www.youtube.com/user/revenantc... for videos and extras.

After being raised in Birmingham, Alabama, in a rather restrictive environment, AMY PLUM escaped to Chicago to an even more restrictive environment at a university that expelled people for dancing. (And where she was called to the dean’s office for “wearing too much black”.) After all of that restrictiveness, she was forced to run far far away, specifically to Paris, France, where she only wore black and danced all she wanted.

After five years in Paris, she ventured to London, where she got an M.A. in Medieval Art History, specializing in Early Sienese Painting (1260-1348) mainly because it promised almost no hope of finding a paying job afterward.

Amy managed to find work in the world of art and antiques in New York. But after almost a decade of high-pressure lifestyle in the Big Apple, she swapped her American city for a French village of 1300 inhabitants.

After signing with HarperCollins for the DIE FOR ME series, Amy left her job as an English professor at Tours University to write full-time. She now lives in Paris with her two kids and big red dog Ella.

She is a huge fan of Edward Gorey and Maira Kalman (and collects both of their books/art), as well as David Sedaris, Amadeo Modigliani, and Ira Glass.

Great review! I’ve been thinking about getting this.

Thanks Megan! It was a great YA book!

I almost died when I saw you had reviewed Amy’s book! If you liked this one, you may as well like the other three books! My favorite? The last one: If I Should Die. I almost cry with the last book, but totally worth my time and space in my shelf!