Join our newsletter to be the first to hear our latest news! Learn More
Home / Reviews / Review: Breaking Point by Pamela Clare 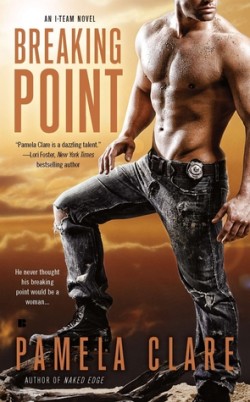 It’s official. There is no denying it now. I am a Pamela Clare I-Team FANATIC!!! And when I say this, I am admitting to thinking of nothing else other than the I-Team series for almost 10 days straight. Pamela and her I-Team series shot straight to the top of my all-time favourites list, standing proudly next to my Ward, Cole, Singh and Kleypas keeper shelves! With a short list of books she has released, Clare has become my newest auto-buy author and if you haven’t read any of her stuff yet, PLEASE please check out any of her novels! I promise you, you won’t be disappointed! Clare gets the *Leather Lust* seal of approval!

Now onto my thoughts about Breaking Point. ..With the last two books being favourites of mine, I was a little worried that Zach McBride wouldn’t stand a chance against the likes of Julian, Marc and Gabe. But, damn is Zach smokin’!! Zach has been set up and taken prisoner by the Zetas, a bloodthirsty Mexican drug cartel who enjoy torturing their prisoners and brutalizing women. As he reaches his last shard of hope, he hears the cries of a terrified woman, the next intended victim of Cárdenas and Zach’s protective tendencies rise to the surface again. With her help, they escape from their captor’s grip and flee to the border for safety. Meanwhile, they deny their attraction for one another until they realize they are not only running away from their killers, but also from their feelings.

I liked what Clare did differently in this book. Instead of keeping the identity of the bad guy a secret throughout the book, from the very beginning we know that Zach is on the good side while Arturo and his Zetas men are the bad guys. I think this worked in developing a sense of urgency in Zach and his action plan while making us hate Arturo and his men on a higher level than in the previous books. Instead of being kept in the dark, we read about the ruthless and brutalizing ways of the Zetas and come to hate them on our own terms. Clare lays out the facts, and we draw our own reactions.

What I loved about this book is the complexity of Zach and Natalie’s relationship. They don’t just fall in love and live happily ever after. Just because Natalie and Zach work together to escape Mexico doesn’t automatically mean they are a couple fit for marriage. Zach is plagued by guilt and his memories in Afghanistan still haunt him. Meanwhile, Natalie still feels her grief of her fiancé’s death. She doesn’t believe herself capable of loving again and Zach doesn’t believe he deserved to be loved at all.

I loved reading about the trials that the both of them had to endure to get to their happily-ever-after. This was definitely an emotional book, where Clare features two tortured souls who find happiness in one another. I couldn’t have asked for more!

Breaking Point
was a nail-biter for me. If you stopped reading at 50 pages (although you won’t, trust me. It’s that good!), this would be a 5 star book. If you took a chunk out of the middle of this book and read from there, it would be a 5 star book. I was baffled to think back on how much happens in this little book. Calling it “action-packed” seems like an understatement.

I savoured this book, reading slowly and read every damned line (sometimes, rereading too) because I didn’t want it to end. It’s a long wait for the next one, but there is no doubt in my mind that whatever Clare releases next will be a star! Bottom line? I-Team will own you.

Favorite Quote:
“You’re going to take a shower – with your guns?”

“I’m not actually going to take them into the shower. I just want them close by. You know, if you’re going to hang with me, you need to learn the correct terminology.”
He held up the AK-47, the muscles of his arm bunching against the weight. “This is an assault rifle.”
Then he held up the handgun. “This is a semi-automatic pistol.”
Then he gave a little thrust and looked down at his penis. “That is my gun. As you’ve discovered, it’s pump-action like a shotgun, but it doesn’t fire bullets.”
Then he shut the door behind him, leaving Natalie to giggle into her pillow.