On My Wishlist is a fun weekly event hosted by Book Chick City and runs every Saturday. It’s where I list all the books I desperately want but haven’t actually bought yet. They can be old, new or forthcoming. 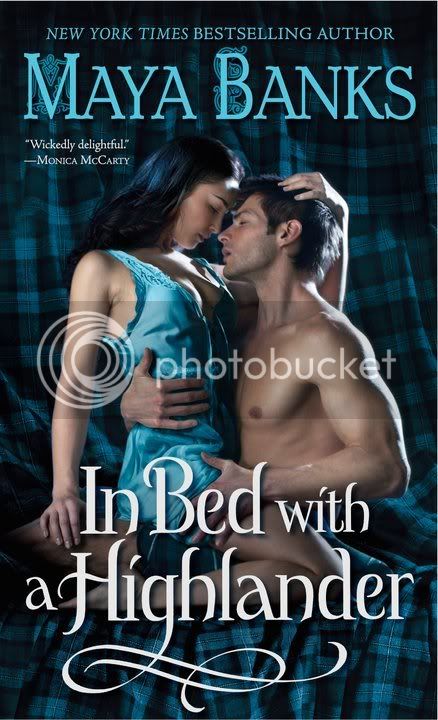 In Bed with a Highlander
by Maya Banks

Bestselling author Maya Banks’s beguiling new trilogy features three unforgettable brothers risking everything to save their clan and their legacy—and to surrender their hearts to love.
Ewan McCabe, the eldest, is a warrior determined to vanquish his enemy. Now, with the time ripe for battle, his men are ready and Ewan is poised to take back what is his—until a blue-eyed, raven-haired temptress is thrust upon him. Mairin may be the salvation of Ewan’s clan, but for a man who dreams only of revenge, matters of the heart are strange territory to conquer.

The illegitimate daughter of the king, Mairin possesses prized property that has made her a pawn—and wary of love. Her worst fears are realized when she is rescued from peril only to be forced into marriage by her charismatic and commanding savior, Ewan McCabe. But her attraction to her ruggedly powerful new husband makes her crave his surprisingly tender touch; her body comes alive under his sensual mastery. And as war draws near, Mairin’s strength, spirit, and passion challenge Ewan to conquer his demons—and embrace a love that means more than revenge and land.

Deeper Than Midnight
by Lara Adrian

At eighteen, Corinne Bishop was a beautiful, spirited young woman living a life of privilege as the adopted daughter of a wealthy family. Her world changed in an instant when she was stolen away and held prisoner by the malevolent vampire Dragos. After many years of captivity and torment, Corinne is rescued by the Order, a cadre of vampire warriors embroiled in a war against Dragos and his followers. Her innocence taken, Corinne has lost a piece of her heart as well–the one thing that gave her hope during her imprisonment, and the only thing that matters to her now that she is free.

Assigned to safeguard Corinne on her trip home is a formidable golden-eyed Breed male called Hunter. Once Dragos’s most deadly assassin, Hunter now works for the Order, and he’s hell-bent on making Dragos pay for his manifold sins. Bonded to Corinne by their mutual desire, Hunter will have to decide how far he’ll go to end Drago’s reign of evil–even if carrying out his mission means shattering Corinne’s tender heart.

One Grave at a Time
by Jeaniene Frost

The grave is one wrong step away.

Having narrowly averted an (under)world war, Cat Crawfield wants nothing more than a little downtime with her vampire husband, Bones. Unfortunately, her gift from New Orleans’ voodoo queen just keeps on giving–leading to a personal favor that sends them into battle once again, this time against a villainous spirit.

Centuries ago, Heinrich Kramer was a witch hunter. Now, every All Hallows Eve, he takes physical form to torture innocent women before burning them alive. This year, however, a determined Cat and Bones must risk all to send him back to the other side of eternity–forever. But how do you kill a killer who’s already long dead?