It’s Monday! What Are You Reading? Is a meme hosted by Shelia over at Book Journey.

Devil in Winter by Lisa Kleypas

Easily the shyest Wallflower, Evangeline Jenner stands to become the wealthiest, once her inheritance comes due. Because she must first escape the clutches of her unscrupulous relatives, Evie has approached the rake Viscount St. Vincent with a most outrageous proposition: marriage!

Sebastian’s reputation is so dangerous that thirty seconds alone with him will ruin any maiden’s good name. Still, this bewitching chit appeared, unchaperoned, on his doorstep to offer her hand. Certainly an aristocrat with a fine eye for beauty could do far worse.

But Evie’s proposal comes with a condition: no lovemaking after their wedding night. She will never become just another of the dashing libertine’s callously discarded broken hearts — which means Sebastian will simply have to work harder at his seductions…or perhaps surrender his own heart for the very first time in the name of true love. 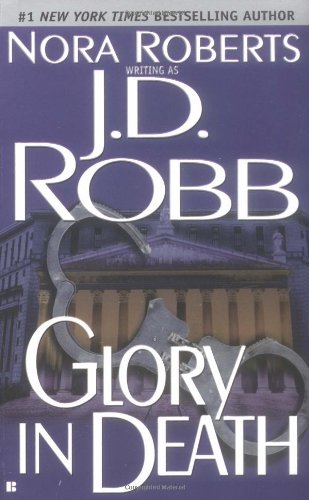 Glory in Death by J.D. Robb

Police Lieutenant Eve Dallas has no problem finding connections between two violent crimes. Both victims were beautiful and highly successful women whose intimate relations with men of great power and wealth provided Eve with a long list of suspects—including her own lover, Roarke.

She lives for passion.

Bold, impulsive, and a magnet for trouble, Juliana Fiori is no simpering English miss. She refuses to play by society’s rules: she speaks her mind, cares nothing for the approval of the ton, and can throw a punch with remarkable accuracy. Her scandalous nature makes her a favorite subject of London’s most practiced gossips . . . and precisely the kind of woman The Duke of Leighton wants far far away from him.

He swears by reputation.

Scandal is the last thing Simon Pearson has room for in his well-ordered world. The Duke of Disdain is too focused on keeping his title untainted and his secrets unknown. But when he discovers Juliana hiding in his carriage late one evening—risking everything he holds dear—he swears to teach the reckless beauty a lesson in propriety. She has other plans, however; she wants two weeks to prove that even an unflappable duke is not above passion.

Nice variety. I am especially fond of the In Death series by J. D. Robb. I love watching the relationship between Eve and Roarke develop. My Monday Report is here. Have a great week!

I loved The Devil in Winter, that Sebastian is such a cad!!!

new follower!
Haven’t read any of these, but hope you enjoyed/enjoy them!

Glory and Death looks really good. Enjoy your week and your books.
My Monday: http://www.rundpinne.com/2011/06/its-monday-what-are-you-reading-45.html

Never read a Nora Roberts book but I have seen a couple of the movies made out of her books. Not sure why she writes under JD Robbs when it says on the book Nora Roberts writing as …. lol.

Thanks for stopping by my blog earlier! 🙂 Following you on the networked blogs.

Glory in Death is awesome! I’ve read it so many times! And the Eleven Ways book looks just great! Great reads! Have a fun reading week!

Devil in the Winter was great fun. Hope you enjoy it.

I love all Lisa Kleypas books but my fav in the Wallflower series was Daisy’s story, I think the title is Scandal in Spring.

I just finished Night of Fire by Barbara Samuels (you can buy the ebook from Smashwords). Loved it; it was tear jerker tho. I think it’s part of a series too. Hv to hunt down the rest.

I have never read anything by Lisa Kleypas but the Wallflowers series looks really interesting! Thanks so much for visiting me at Hands and Home. Have a wonderful week and happy reading!!!
Bonnie @ HandsAndHome