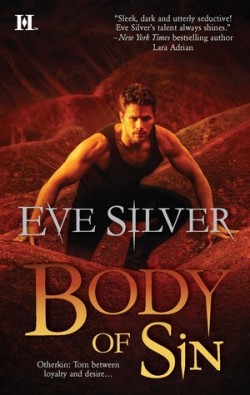 Body of Sin
by Eve Silver

Lokan Krayl used to have it all before he was murdered. And now, Lokan has a chance when his immortal brothers resurrect him. But first, he has to pass through the twelve gates of Osiris, a daunting task.

Bryn Carr is his guide. But the two of them aren’t on the best of terms. In fact, their history with one another haunts them to this day. There were times when I didn’t really like Bryn’s character. I loved her motherly protectiveness and her relationship with her daughter, Dana but those flashbacks into her past with Lokan didn’t do it for me. While Lokan found her running mouth to be endearing, I thought it to be a little annoying. Thankfully, the entire book is not like that and we can see the growth in Bryn’s character as Silver switching back from the past to the present. I much preferred the fierce, protective Bryn over the chatting, naive Bryn.

But what probably shines the most from this book is Silver’s worldbuilding. I’m sure that if I read the other books in the series, I would be in love with Silver because the world is so intricate and impressive. While reading this one, I felt like I was being bombarded with many terms and characters. Silver deserves a round of applause for creating such a unique and complex world. I loved the history and the idea behind this world.

Furthermore, I have to rave about her writing style. Silver has a distinct voice in her writing and I loved it! Her writing flows and she pays great attention to detail, which I can appreciate. She gets a definite thumbs up from me!

Overall, Body of Sin was a great book! I already have the first three and there is no doubt that I’ll be going back to read them soon!

Eve lives with her husband, two sons, an energetic Airedale terrier and an exuberant border collie/shepherd. Contact Eve through her website at http://www.evesilver.net

Sounds really good! I’ve never even heard of her before.

Hi Megan! This was very good! Definitely check her out!

I just looked her up on GR. She’s got a loy of stuff out!

I know! I’m actually shocked it took me so long to discover her!