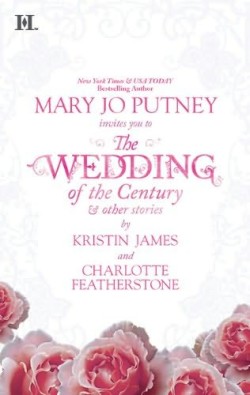 This anthology is three stories on what happens after the wedding, when perhaps the hero and heroine didn’t quite have the best start, but somehow end up walking the aisle anyways. Can these three couples fall in love despite the circumstances that brought them together?

The Wedding of the Century by Mary Jo Putney

This is a my first Mary Jo Putney book and although it didn’t set my world a light it was quite nice. I think what stopped me from enjoying it so much was that the whole story was based around misunderstandings and miscommunications. These kind of stories bug me, I spend the whole book just wanting to bang the protaginists heads together and tell them to sit down and have a proper discussion like rational adults instead of agonizing in silence. This book was no exception it bugged me. But not enough to spoil the whole thing, I did like the main characters of Sunny and Justin, Sunny was as the name implies has a cheerful dispostion, but when her mother forces her to marry Justin she fears that she will never love or be loved when he seems so distant and cold. But little does he know that Justin has loved her since he first saw her and although it may be a marriage of convinience he longs for it to be more.

In conclusion I did enjoy this story, it had likable characters and a hot moment or two, and I will keep a look out for any Mary Jo Putney books that interest me.

Jesse’s Wife by Kristin James
I have a weakness to western romances, so I think I was predisposed to like this story before I even started! But I did genuinely like this, it was a sweet story about a young newly wed couple, who had been forced in to the marriage by unfortunate circumstances. However, Jesse doesn’t think the marriage unfoturnate at all as he has been in love with Amy for years, but she was above his station as he is him employers daughter, so they were just close friends.

Like the MJP book this book was based around a misunderstanding, but it didn’t annoy me as much in this book, mainly I think because there wasn’t as much silent anguish (just a huge case of blue balls!) I thought the whole story was rather cute, watching them both come to terms with their newly married state and watching Jesse trying to keep his hands off Amy, due to the erroneous assumption that she would not welcome him.

This was an enjoyable and light read that left me with a smile on my face.

Seduced by Starlight by Charlotte Featherstone

I am a huge fan of Charlotte Featherstone, and this story was the reason I wanted to read this anthology. It is about the Jase and Blossom the children of the couples in “Addicted” and “Sinful”

This book was more to do with Jase’s seduction of Blossom and his efforts to convince her that he was genuine in his courtship and really wished to marry her, but it does have a chapter of them on their honeymoon having a wicked time with some strawberries and clotted cream!

Although I did not think this was as good as “Addicted” and “Sinful” I really liked this story, it was sensual and sweet, definately a lot naughtier then the previous two novellas. Jase was seductive and charming and I am really not sure how Blossom managed to resist him for so long! I would have been a puddle at his feet from the first moment. But Blossom was strong willed and spirited and I found myself liking her immensly and understanding that she was trying to protect herself.

What also delighted me about this book was that you got to see some famliar characters, I love to see couples after they have had their HEA, so it was a treat to see the Anais and Lindsey and Jane and Matthew a couple of decades later and still very much in love.