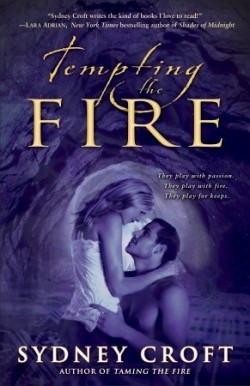 Tempting the Fire
by Sydney Croft

I liked this book a lot more than I expected. When I first read the description I wasn’t too crazy about it. In the previous books we never get to see much of Marlena, other than she was Dev’s secretary and sometimes lover, and she is cursed with falling in love with any man she has sex with, but her curse also makes sure that that man could never love her.

Chase & Marlena Marlena is now trained as a Seducer and she is sent on a mission to the brazilian forest to help Sela figure out what’s going on with a missing soldier, Chase. She is supposed to infiltrate this camp and seduce the head of the operation to find out what’s going on and free Chase. But Chase has been infected with a “chupacabra” type virus and he is now turning into a beast when angered. Chupacabras also mate for life, and Chase recognizes Marlena as his mate when he first sees her.

Sela & Logan Sela is the expert on chupacabras, even though she doesn’t believe in them. She’s worked for ACRO for a few years, and she has a special ability to read peoples minds and see into their past but only while they orgasm. So she’s back up in case Marlena can’t get answers out of Logan. But Marlena doesn’t even stand a chase. Logan wants Sela from the first moment he sees her. Even though Logan works for a private company that is supplying weapons to ACRO’s enemies, it’s run by Logan’s father, which means he has little control over it. And he owes them his life, as he was injured almost beyond repair while in the military and they saved his life by making him part machine.

Dev & Gabe We don’t get to see as much of them in this book as I would’ve liked. Dev is a bit disappointed with Gabe’s lack of interest and dedication to ACRO and learning to control his abilities, and Gabe decides he has to prove himself by doing something majorly stupid.

Creed & Annika I love these two. Have I said that before? Yeah? Well, I’ll say it again. I love them!!!! I want to have Creed’s babies!!!!!  hehehe  First Annika is jealous because apparently Creed had sex with Sela (way before Annika), and then we get a *huge* surprise!!!! Won’t give anything away here, but this is a big one and very emotional.

I’m really looking forward to the next book, and I’m sad this will be the last in the series. Are you sure you don’t want to write more???  Really?  Pretty please with a cherry on top!

Thanks for the review. I’m sorry to say I haven’t read any of the books in this series but they’re now on my TRL.
Carol L
Lucky4750 (at) aol (dot) com

Thanks for the review! I’ve wanted to start this series and I’ve heard such awesome things about them! Added to my wishlist 🙂