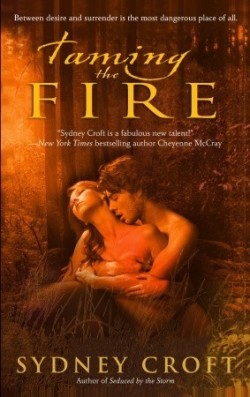 Taming the Fire
by Sydney Croft

At the beginning of this book I liked Trance a lot. The glimpses we get into his mind and his feelings made me feel for him from page one. However, when we started to throw Rik into the mix, I didn’t like her at all at the beginning. Their relationship eventually develops, and I went through ups and downs between liking them and not liking them. Maybe it had something to do with the fact that some of their sex scenes were just not for my taste. Maybe it’s just that I didn’t like Rik 100%. I did feel bad for her and how she’s had to live her life. The twist at the end of who she had actually killed I thought was a pretty hard thing to recover from, and I was a bit thrown off about how easy it was after so much tension for things to patch up and for them to end up together. Also, I didn’t like that after the collar came off, Rik’s personality changed completely.

That being said, I love the secondary characters, as always.  What a shock! After Oz’s death in the previous book I couldn’t imagine Dev being with anyone else. But, as Oz promised, he has sent someone new for him. Gabe. I just loved Gabe. And did I mention that he has the coolest power!?!? Invisibility. Except he can’t control it well. When Dev was watching Gabe and Annika training and Gabe went invisible and next thing Dev feels is hands caressing him…. I almost died, sooo hot. And Gabe is determined, as is Oz and Marlena, to make sure they are together. I wanted to read more and more about these two!

Marlena…. what can I say? Even though she plays a small role in this book, we get a glimpse of what her life is like and the curse that she has. I do want to read the next book as it is her in her new role as a Seducer. Will be interesting to see how that will play in with her curse.

Ryan and Meg were sooo cute. Compared to all the other couples in this series they might be considered a bit normal and vanilla, but there was so much emotion there. It was sweet to see Ryan’s memories come back, and how his feelings would show through even when he couldn’t remember a thing. And this also ties in ML, who I wouldn’t mind reading more about.

It’s funny you just posted this review because I just started this book! What timing.

Anyways, I’m actually kind of leery because I didn’t like the last book as much as the first couple in the series. Hopefully this one will be better for me than the last! 🙂

Thanks Sarah! Hope you like it. This one was a bit strange for me, but I still enjoyed the story! You didn’t like the 3rd book? It’s my favorite, followed by the 1st book.

Hey, I actually had to google the “instruments” for THAT particular thing, and shuddered… Why would you do that? Yeah, that was def a turn OFF for me. I was devastated in the previous book about that. But I do love Gabe!

I also really enjoyed Seduced by the Storm. Wyatt and Faith are close second following Annika and Creed as my favorite couple.
Looking forward to reading this one.

Annika and Creed are my favorite couple as well!!!! Cred is delicious!

This series is definitely on my TRL. I like the descriptions you gave and look forward to reading the series.
Carol L
Lucky4750 (at) aol (dot) com