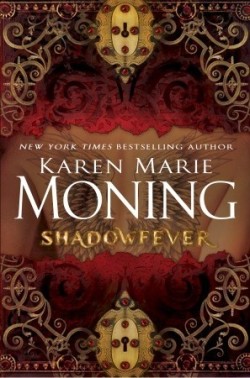 Everything comes down to this and KMM made this so epic, so unbelievably good that I knew I had to take my time reading this. I don’t think I’ve spent so much time with a book in my life. Knowing that this was the end, I wanted to savour every word on each page and I still don’t think it’s enough in the end! I NEED more Fever!

MacKayla Lane is one of my favourites UF heroines! Her narration is so unique and distinctly hers that I find any other changes in the POV to be annoying (No offence, Dani). I just get so into Mac’s head that reading from another POV throws me off. I adore her courage and her resiliency. Despite the fact that who she thought she was in the past was all wrong, she still stays true to herself in the most important ways. And I couldn’t ask for more in a heroine. Mac kicks ass!

Barrons, you infuriating man! Sometimes I just want to maul him for being so incredibly secretive, but then later I always find myself giving in and loving him despite his mysterious ways. His beast explains his animal magnetism and makes him that much more irresistible. How Mac can keep her hands off him is a mystery to me! And his secret? I didn’t see that coming AT ALL. It’s no wonder he kept it all under wraps this entire time!

And my girl Dani! I fecking lost it when I found out that she was Alina’s murderer! What the hell. A murderer. At thirteen.

All because of that stupid lady, Rowena. I’ve always hated this old hag. Manipulating Dani was the last straw for me. Die! What KMM does is crazy! You think Mac is talking to Isla, her “MOTHER” but no, she’s Ro – ha! Gotcha! It’s the Sinsar Dubh! My head is still reeling from all this. I couldn’t possibly understand this world even if I wanted to.

Then all this time I hated LM for all the damage he caused. For Mac’s rape, for supposedly killing Alina. But he really did love Alina, didn’t he? That was another thing I loved about this book. There was heart and hope even through all the dark times. Mac’s grief in the beginning is enough to bring on the tears.

And Christian – I wouldn’t be surprised if we see him again in the new series. Please let it be about him! PLEASE! Lots of unanswered questions with him…

But most of all, the Fever world is what captivated me from the beginning. So intensely mysterious and alluring, I found myself mesmerized by KMM’s worldbuilding. I would say I’d love to live in this world, but I really don’t. I’m way too chickenshit to live a second in Mac’s shoes.

Nevertheless, I’m saddened to have Mac’s journey end…for now. But I will definitely be picking up this series again and again!

STAY TO THE LIGHTS!