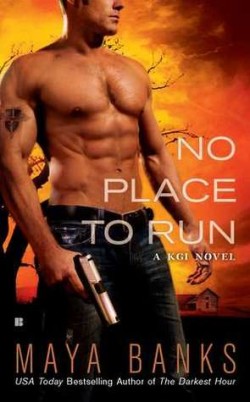 No Place To Run
by Maya Banks

I love the KGI world that Ms. Banks has created! I wasn’t completely sold on book 1, but this one was excellent!

There’s only one word to describe Sam… HOT! I liked him so much better as the hero of this story. He’s so alpha and in command, but so soft and sweet like a teddy bear.

Sophie has a very strong personality, doesn’t take bullshit from anyone since she’s had to protect herself and do what she had to since being a little girl and living in the environment she did, without the love and support of a real family.

We still get a glimpse of spunky Rusty, but we also see a more emotional side to her this time.  I am so intrigued by her character and can’t wait to see her grow and mature.  Garrett is his usual grumpy, hard self and we get to see more of Van.

The books starts out in the middle of a mission in Mexico, except page 1 finds us with Sam having some extra-curricular activities with a local waitress, who he seems to just not be able to stay away from.

Lets’ just say the chemistry between Sam and Sophie is sizzling.  During this mission he was not aware that she’s the daughter of the man he’s in Mexico trying to take out.

Sophie has lived a horrible life, her father killed her mother right in front of her, and has made her life a living hell, a prison. She now sees the opportunity to be free and get rid of him, and she takes it. Even though it will end her encounters with Sam forever. Sam, who is quickly becoming an addiction to her.

Now fast forward 5 months… Sam is back home, and can’t get Sophie out of his head, he went back for her, tried to find her, but she had just vanished. Except she comes back into his life and finds him, she’s been shot… and PREGNANT. She confesses who she is, but not that she killed her father. She knows her uncle is tracking her because of something she stole after killing his father and will stop at nothing to get it. Even killing her, the baby or Sam. But Sam can help her. She knows a bit of who he is, and he can protect her and the baby now that she can’t run anymore.

Sam, Garrett and Van are all skeptical, but they protect her until they can get to the bottom of the story, which soon evolves into assassins coming after Sophie, Sam’s father having a heart attack, and their mother getting kidnapped from the hospital.

There’s a lot of action, specially towards the end of this book, there’s many twists, and they all have to prove their loyalties for love and family.  It starts off with a bang and continues on a ride full of passion, intrigue and action that you won’t be able to put down.

Maya Banks is the #1 New York Times, #1 USA Today and international bestselling author of over 50 novels. A wife and mother of three, she lives in Texas.