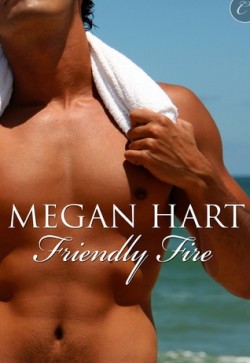 OK, wow, you can really read this in one sitting! This book is pretty steamy, but it just wasn’t long enough.

The first thing I HAVE to mention is, thank God this got re-issued, because by looking at the previous cover I might have not been in such a rush to read it! So two thumbs up on going with the hot guy at the beach.

OK, so Kendall is a DEA agent, her partner recently got killed during friendly fire (he jumped in front of a bullet, by accident, while on an investigation). She has blamed, and hated the agent that shot that bullet and accidentally killed him, Zane Vincent.

Somehow a big “company outing” is organized for everyone involved to get some therapy and relaxation and they go to a beautiful island for a week-long getaway.

Kendall can’t stand the fact that she has to be around Vincent, made all the worst when he was moved in to the room next to hers (in a secluded private cabin). Of course their first encounter at the cabin couldn’t have been more awkward. She thought she was all alone, had been getting busy in the shower without finding release, then goes outside in just a towel and tries to finish up the job, except she notices too late that he was outside smoking a cigarette and when she’s face to face with him is exactly the moment she finally climaxes! WHAT?? I had to read more!

These two have pretty good chemistry, I guess there was an attraction on his part before this, because he went after her very straightforward, and as with a lot of Hart’s heroines, she gives as good as she gets.

I’m sorry… When that old cover popped up in my Google feed, I had to click on your review to see WTH this was! That is just freaky-fabulous!!

Great review, Francesca! I still haven’t read Megan Hart. 🙁
I think I would be much more likely to read the book with the new cover, too. ;D

*cue gasp* Nissie…. you haven’t read Hart???? Well, you must get to it, she’s amazing!!! LOL I wanted to ignore the cover issue but I just couldn’t. 😉 I’m looking forward to see what you think when you finally read her stuff.