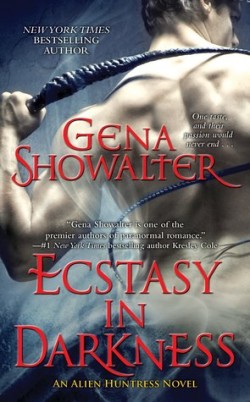 Ecstasy in Darkness
by Gena Showalter

Ladies, it’s official! I am now a huge fan of the Alien Huntress series and I can actually say I like it better than Lords of the Underworld. *cue gasps*

I love the novelty of this paranormal world. There’s aliens, of all types, and some sort of an alien invasion that the AIR agents are dealing with, by a particular alien species called Schon. They are sex aliens, basically succubi/incubi that need sex to survive, but when they have sex they infect the person with some sort of flesh eating, mortal disease. AIR has been fighting them since book 3, and now that the Schon Queen has finally arrived they have to stop her at any cost.

The usual suspects are here, mainly Mia from book 1, who has a bit more of a role in this investigation, Dallas, one of my crushes, the human who has alien abilities after drinking some of Kyrin’s blood, Bride and Devyn, ohhhh Devyn, can I keep him? Like, maybe… tied to my bed and at my total mercy? Sorry got distracted. Where was I?

I was not familiar with the heroine, Ava, human, but apparently she’s an AIR trainee, along with her best friend Noelle, human, Jaxon’s cousin. These two are a riot! I love their friendship and their banter and I can’t wait for Noelle’s book next. The hero however, we met briefly in book 4. Gorgeous, tough, and brooding vampire Victor McKell. He has now been kicked out of the underworld where vampires live, and has to learn how to live topside. Except he wasn’t expecting to mate Ava, a human of all people!

While figuring out a way to seduce her and keep her, McKell helps AIR in the investigation and hopefully aprehension of the Schon Queen. And he manages to turn a dog into a vampire. Yep, I’ve seen it all, a vampire-dog.

And let me go back to Dallas. Ahhh yes. Dallas has some sort of a connection to the Schon Queen, apart from his desire for her, which he can’t seem to control. But will he be able to resist her? And will he be able to stop the events he forsees in his vision, which might ruin his friendship with Hector? Hector… sexy, tattoed, “special-hands/magic-fist” AIR agent, who has a crush on Noelle.

The only thing missing… I could’ve definitively used some more “sexy time” between Ava and McKell.  Even though they had a lot of smoking hot almost moments, I can’t give this book the hotness award!

If you haven’t read the Alien Huntress series, START NOW! You don’t know what you’re missing. Even after a “rough-start” with book 1, these books DO get better as the series goes along. They’re sexy, full of humor, with enough action and intrigue to keep you on your toes, a great supporting cast, drool-worthy heroes, VERY likeable heroines, and a fun take on aliens. READ THEM NOW!

“He came to me, so I don’t have to wash a goddamn thing,” she called, knowing Noelle was long gone.
“Still talking,” McKell shouted from the bedroom.
“Still annoying me,” she shouted back. – McKell and Ava

“So you weren’t wanting the aid of another man?”
“No.” She could barely handle McKell.
“Then I won’t spank you.”
McKell… spanking her… Someone get this man a paddle. – McKell and Ava

“Your franctic call dragged me out of bed, and I’m thirsty. So. . . Dallas. Beer? Blink once if the answer’s yes.” – Hector

“One day, Dear John, you’re going to wake up, and your penis is going to be resting on the pillow next to you. Not that you’d notice its absence, small as it is.” – Noelle

“Be a good boy and fetch me another drink.”
“Darling, I can’t. You know how jealous you get when every woman in the room watches my ass as I walk away from you. So, really, by refusing to help you, I’m doing you a favor.” – Devyn and Bride

Great review! I haven’t got to this one yet. I’m all over the place with this series.

Thanks! You mean you’re not reading in order? I guess you don’t HAVE to, but it does help. LOL This is a great one!

One of her more awesome books.