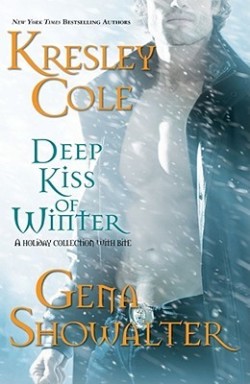 WHAT’S A WROTH BROTHER GOT TO DO TO GET HIS OWN FULL LENGTH BOOK!?!!?

First, Nikolai and now Murdoch? I WISH THEY HAD THEIR OWN FULL LENGTH NOVELS!!! These Wroth brothers deserve better!

Once again, Kresley Cole proves herself with this long novella. I didn’t think Murdoch’s story would be that great, considering his less than desirable reputation as a manwhore. I wasn’t that interested to read his story because I am so smitten with his brother, Sebastian, but Murdoch’s got some moves, no doubt!

I love Murdoch! As a former rake in his human life, he’s confident enough that his moves will work on Daniela, but when Danii doesn’t fall for his charming words and gift offerings, Murdoch realizes he can’t tempt Danii with his previously effective material. I found that the fights and conflicts between the two created for a much more interesting story. And the fact that Murdoch comes for her in the end makes me melt more than any words he can say.

Daniela the Ice Maiden is such a unique character. I found myself instantly adoring her. Part Valkyrie and part Ice Fae, Danii’s definitely got one of the most interesting powers from the Lore. But her Ice Fae half prevents her from forming meaningful relationships with either side. Her Ice fae side wishes to see her dead and she doesn’t necessarily fit in with her Valkyrie sisters. Being alone and untouched for so long, Danii finds it hard to let herself fall in love…especially with a vampire who has a reputation of “hitting it and then quitting it”.

I loved the interactions between Murdoch and Danii. I was surprised to see so much development in the plot and reading about familiar names here and there. I especially loved the part where Murdoch says he bought a gemstone comb for Danii, but when he tries to give it to her, he can’t find it. If you’ve read Dark Needs at Night’s Edge, then you know that Neomi Laress, Conrad’s mate stole it from Murdoch when he was unaware. Little things like that make me smile and I can’t help but rave about KC’s plotting.

After reading Untouchable, I think Murdoch and Conrad are tied in second place for my heart. Danii and Murdoch’s story is so well-planned and eloquently written that I can’t believe it’s only a novella. It’s hard to believe that this story spans from the first IAD novella, The Warlord Wants Forever to the latest instalment when it was released. KC is a freaking genius!

Lastly, I need to mention that icicle scene in the wintery woods! That was HOT, right!? After reading all these books with sexy winter sexcapades (Sin Undone snowball scene ;P) I can’t help but find winter a little more enjoyable. I’ll admit, I’ve been yelling at kids having a snowball fight in the streets to SAVE THOSE SNOWBALLS! I can think of a much better use for them, if you know what I mean! ;P

Tempt Me Eternally by Gena Showalter

I do want to bring up one issue that bothered me before getting into the review of this book. I actually read this story AFTER Seduce the Darkness, which is how it was published if I understand that correctly. However in my opinion, it would’ve been much better to read that book AFTER this story.

Anyway… on to my review…Aleaha is a shapeshifter, she can change into anything or anyone she wants, and she has currently taken the identity of an AIR agent. She thinks no one suspects her, but actually everyone knows she’s no the real agent, but like that she’s good at her job and doesn’t have some of the issues the “original” girl had.

Breean… where to start, he’s a rakan, which I’m coming to realize it’s a race of aliens I really seem to like! *Rakans are completely gold, from the hair to their toenails and eyelashes* Him and his group of rakan soldiers landed on Earth while the AIR agents were expecting a different invasion, and that’s where Breean meets Aleaha, and he’s totally captivated. She has to be his.

And let me tell you these two are just HOT! I am enjoying this series more and more and I really can’t wait to read the next book! This is a completely different take on aliens, so don’t let the subject stop you from reading this series. It’s amazing!