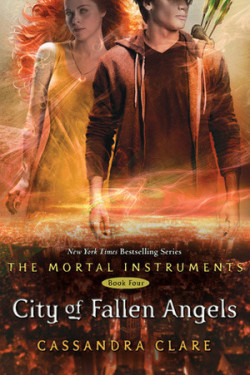 I’ve loved this series ever since City of Bones came out. So it’s been awhile since I’ve read something new in The Mortal Instruments world! When I heard that Clare was extending her TMI series, I was thrilled, but what I didn’t expect was for the plots to intermingle with her Infernal Devices series and previous three books in the Mortal Instruments series. So if you haven’t read Clockwork Angel, DO IT BEFORE you read this one. You may miss a very important fact concerning Alec and Magnus.

I LOVE the characters in this entire series, even the bad ones! But I found that there was more of a focus on relationships in this book than the other books before.

Jace and Clary are FINALLY together in this one, but that doesn’t mean that everything is happy-happy. Jace finds himself having dreams of hurting Clary physically, sometimes going as far as holding a blade to her. Therefore, when they try to be intimate, Jace always pulls away in an effort to keep Clary safe. Meanwhile, he thinks he’s going crazy because of all his sadistic thoughts and tries to keep himself distanced. I missed Jace’s sarcastic personality, but there are glimpses of it when he reaches the end of his temper.

Then there’s Simon – the loser turned hottie – who has TWO hot chicks on each of his arms. Unfortunately, Maia and Isabella have no idea that Simon is seeing both of them at the same time. Simon plays a much larger role in this book and I love reading about him!

There is also a new(ish) character who is introduced and HE IS MY NEW FAVOURITE! Kyle tries out for Simon’s band, hoping to be the new leader singer for the group. But there’s more to him than meets the eye. I have to give Clare a lot of props for plotting this! Very smart!

Then there’s Magnus and Alec who are off in Vienna on a little vacation at the beginning of the book. But when they are called back for an emergency, they’re relationship hits some rocks. If you’ve read Clockwork Angel then you are familiar with Camille Bellecourt and her past with Magnus. Let’s just say Alec gets green with envy and his love for Magnus is tested.

And finally, one of my favourite characters from City of Glass shows up, not quite the same. But it still gets me super excited!

I know most of my friends don’t read YA, but TRY THIS ONE! It’s one of my two favourites from this genre and I swear you won’t be disappointed!!! 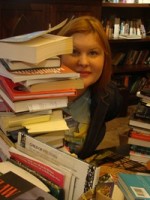 Thanks Sarah! Hope you enjoy it! It’s a great one. Lots of Simon and other surprises!!