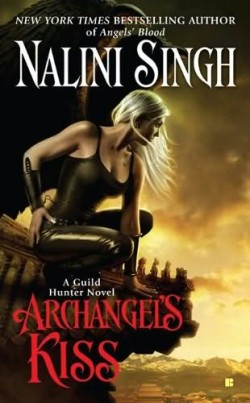 Archangel’s Kiss is the second book of the Guild Hunter series that follows Raphael and the newly Made angel, Elena. I know this is supposed to be an urban fantasy romance, but I feel that Archangel’s Kiss focuses more on the romance this time around. A lot of the book is about Elena and Raphael learning to trust each other on a deeper level. Though some may find this annoying and hella boring, I think it’s essential for their relationship to work. Raphael is the goddamn archangel of New York so he is used to being in control and having the power in a relationship. And although he is one dangerous mofo, there is no way that Elena would cower away from him and just let him boss her around. So for things to work out well between them, they both need to find a middle ground to work with. And that’s exactly what Singh does in this book. She takes the time needed to really develop their relationship from the core and it strengthens the romance aspect of the book.

On the other end, though Elena may not be entirely fit after a year’s coma, she is still getting in on the action. When a few of Raphael’s angels are found badly injured, it’s up to Elena to use her hunter-born talent to track the assailant. Meanwhile, Lijuan the oldest of the archangels, invites Elena to a ball in the Forbidden City where she houses her toys, the reborn dead. As if that wasn’t enough to deal with, Elena is also having trouble keeping the past shut behind her. Her memories of her childhood are coming back to her in a flood and she struggles to keep herself in one piece.

In Archangel’s Kiss, we also get glimpses of Raphael’s past. So much has happened to him since he was born and it’s great to read about the events that happened to him long ago. His backstory is just as important to the book as Elena’s is.

There are also appearances from the amazing supporting cast. I’ll admit, I was really looking forward to reading about Dmitri, Venom and Illium! They make such an impression whenever they are in the spotlight. You have to admit, Dmitri in the pool scene was so much fun! And to read about the rest of the Seven was great as well. Naasir sounds like a dangerous SOB. So naturally, I’m intrigued by him. Galen seems to enjoy giving Elena a hard time about Raphael. Aodhan, the gifted artist definitely has an interesting story behind him. He doesn’t like to be touched. Hmm. Wonder what happened to him? And Jason, I wish there was more about him!

Archangel’s Kiss is brilliantly crafted. The pace was perfect for the story and I found that the characters evolved but have also stayed true to who they were in the first book.

Great review girl! Can you believe that I’ve never read anything by her?

You’re missing out!!!! Both series are AMAZING!

Interview and Giveaway with Nalini Singh | Under the Covers Book Blog

So.... am I the only one with the urge to read som