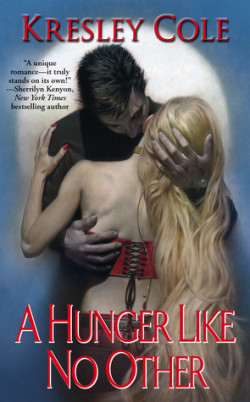 After reading A Hunger like No Other, I’m just not satisfied enough. I NEED to read more of Cole’s work! Cole’s writing style is flawless and it progresses effortlessly. I love how she incorporates the Scottish accents in her werewolves. It just adds so much depth to her characters. Plus, it’s damn sexy!

Lachlain is the king of all Lykae and he has been tortured for decades by vampires, his clan’s greatest enemy. But when he scents his mate nearby, Lachlain does whatever is necessary to reach her, even if it means escaping without being whole.

But when he finds her, he is shocked and furious to find out that she is a member of his enemy’s horde, a vampire. But even though Lachlain despises what she is, he cannot forget that fate has brought them together and that she is his. He has searched and waited far too long to simple lose her now.

Emmaline is a timid little creature that has been sheltered her entire life. So when a very large and handsome man tells her to strip for him and join him in the shower, Emma does as she is told because she is so frightened. At first, I thought that Emma had no control over the events that happen in the story. Lachlain is big and demanding and will not stop until he gets what he wants. It seemed that Emma’s choices didn’t matter.

But then I realized reading through Emma’s POV that she is irrationally insecure. She seems to draw distorted conclusions from her past, like her punishment for almost running into direct sunlight. The fact that she doesn’t know who her real father is doesn’t help either. And to further top things out, she is also part Valkyrie. So in a world of supernaturals, she feels like a monster herself.

But Lachlain doesn’t give up on her. Their relationship is very strained and although this wasn’t my favourite book of the series, it was still enjoyable.

I was thrilled when Emma the Timid finally grew a backbone. She gained her courage gradually, but it was still very much evident and I think she was smart in slowly learning to trust Lachlain. She didn’t just jump straight into his arms, but instead learned his ways and learned to love him back.

My FAVORITE of the series and I’ve read them all. Love love love Lachlain! The best alpha… I would let him give it “tae” me *eye waggle*

LOL! Love their accents! Thanks Dee!

I read this last summer. This book turned me off. I tried. I even re-read chapters. In the end, all I could say was, “jeez, how many showers does this girl need?!”

Leeann, did you continue the series though? I wasn’t too crazy with Lachlain’s attitude but I love the series!!